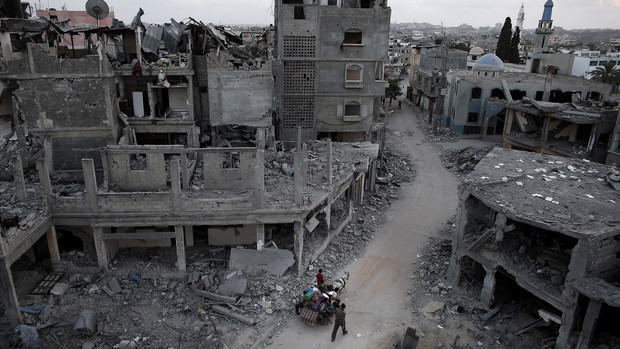 Israel and Gaza Strip militants extended their temporary truce for 24 hours in another attempt to bridge differences blocking a long-term accord.

The extension of the Egyptian-mediated talks was announced early today in Cairo by Azzam al-Ahmad, a member of the Palestinian negotiating team, and confirmed by Hamas negotiator Izzat al-Risheq on his Facebook page. The Israeli government sent a text message announcing an agreement had been reached.

“The gap is big, and the negotiations are difficult and complicated,” Palestinian Ambassador to Cairo Jamal Shobaki said today on Voice of Palestinian radio. “The Egyptians may present another proposal today.”

The delegations have been laboring for the past week to reach an agreement to end a month of hostilities. The fighting killed more than 2,000 Palestinians, including hundreds of civilians, according to Gaza officials, and 67 people on the Israeli side, all but three of them soldiers.

Al-Ahmad said no agreement was reached on the major issues dividing Israelis and Palestinians. Hamas, which has controlled Gaza for seven years, has demanded an end to the blockade on the coastal territory that Israel imposed after the militant group won Palestinian elections in 2006, citing security considerations. Israel has sought assurances that militants won’t resume their rocket attacks and cross-border raids.

Both sides said yesterday they are ready to resume fighting if the talks fail. “The Israeli Defense Forces are gearing up for a very forceful response if the firing resumes,” Prime Minister Benjamin Netanyahu said in a text message. Hamas official Mussa Abu Marzuk said on his Facebook page that “the Palestinian delegation in Egypt will never surrender any of the legitimate rights of our people.”

Robert Serry, the United Nations’ special Mideast envoy, said the truce talks must make progress on the key demands the sides have made. In a speech to the UN Security Council, Serry also urged Palestinians to “rally behind” a joint Hamas-Fatah government established in June to deliver the “positive, transformative change that Gaza so badly needs,” according to an e-mailed transcript of his comments yesterday.

Egypt has proposed an 11-point plan that includes halting hostilities, easing the Israeli blockade and giving the West Bank-based Palestinian Authority a role in rebuilding the territory, according to a report in Egypt’s Al-Shorouk newspaper.

Palestinian President Mahmoud Abbas told reporters in Ramallah Aug. 16 that the Egyptian initiative is the only viable solution to the Gaza conflict. Abbas’s Fatah movement, which controls parts of the West Bank, is represented on the Palestinian negotiating team.

Israel withdrew ground troops from Gaza on Aug. 5 following a four-week offensive that it said was designed to end years of rocket fire and destroy tunnels militants built to infiltrate Israel. It accuses Hamas of deliberately putting civilians in harm’s way, and along with the U.S. and European Union, considers Hamas a terrorist organization.

The Israel Security Agency, better known as the Shin Bet, announced yesterday it had uncovered a Hamas militant network in the West Bank that was plotting to overthrow the Abbas-led Palestinian Authority. The Shin Bet said it arrested dozens of Hamas militants over the past four months who plotted to destabilize the West Bank by carrying out attacks on Israel, and exploit the situation to seize control of Palestinian-controlled areas.

Abbas has ordered an investigation into the allegations, according to the official Palestinian news agency Wafa.