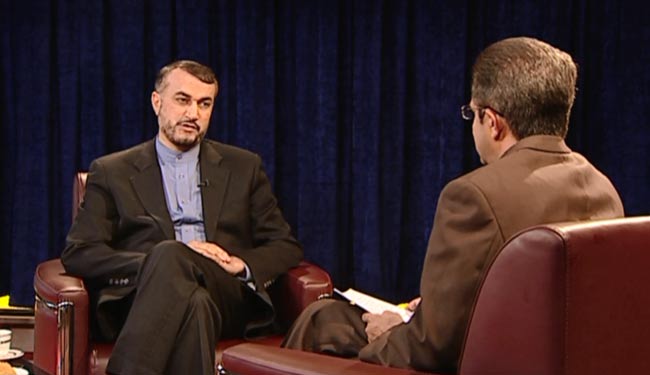 Iran not in need of US, UK help on Iraq: Official

TEHRAN, Aug. 19 (MNA) – Iran’s deputy-FM for Arab and African Affairs has said Islamic Republic does not need any cooperation with US and UK to fight terrorism in Iraq.

Hossein Amir-Abdollahian made the remarks in an interview with Alalam TV channel. He held that had US and UK intended to fight terrorism in Iraq, they should have acted in accordance to bilateral agreement.

Reacting to recent comments by UK Prime Minister, Amir Abdollahian said that “fighting terrorism is a duty for us, so facing anti-human terrorist behaviors in Syria and Iraq, we have used all necessary means within the frameworks of international laws to fight terrorism.”

Deputy foreign minister added that any country – including US and UK – intended to seriously fight terrorism can act in accordance to their agreement with Iraq.

“We have always said that Iran sees no need to cooperate with US and UK fighting terrorism in Iraq and were the Americans determined enough to fight terrorism then they must have proved it in action,” asserted Amir Abdollahian.

Regarding recent actions by US and UK against ISIL in northern Iraq he said that “they attacked ISIL strongholds mostly to defend American citizens in Iraq; the attacks did not intend to strongly respond terrorists.”

Reuters published on Monday that Cameron said that “ISIL militants have exploited the absence of a unified and representative government in Baghdad. So we strongly welcome the opportunity of a new start with Iraqi Prime Minister-designate Haider al-Abadi. I spoke to him earlier this week and assured him that we will support any attempts to forge a genuinely inclusive government that can unite all Iraqi communities – Sunnis, Shias and Kurds – against the common enemy ISIL, which threatens the way of life of them all.”

David Cameron also disclosed that Britain is looking at leading talks with Iran to control the destabilising threat of Islamic State fighters in the region.

“The international community will rally around this new government. But Iraq’s neighbours in the region are equally vital. So we must work with countries like Saudi Arabia and Qatar, the UAE, Egypt and Turkey against these extremist forces, and perhaps even with Iran, which could choose this moment to engage with the international community against this shared threat.”