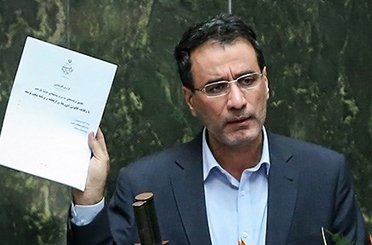 Impeachment of Faraji Dana on Wed.

TEHRAN, Aug. 19 (MNA) – Impeachment of Iran’s Minister of Science, Research and Technology which was rescheduled for today, is postponed to Wednesday.

The impeachment of Reza Faraji Dana which was officially raised in Iran’s Parliament last week, was originally set for this Wednesday. But the government asked Parliament to hold the session on Tuesday due to cabinet’s provincial trip.

Despite Parliament’s agreement with demand, the government took its request back and the impeachment is again set to be held on Wednesday.

Meanwhile, in spite of earlier reports from officials about President’s Rouhani’s presence in impeachment session, a government official told Mehr News on Monday that Rouhani is not likely to attend the meeting.

After nearly two months of unsuccessful negotiations between questioning MPs and Faraji Dana, 51 MPs signed and introduced the impeachment nearly ten days ago.

According to Iranian Constitution, a minister can be impeached by a request from at least 10 MPs. Within 10 days after the impeachment is officially announced on Parliament floor, the impeached minister should answer to the questions of MPs after which the Parliament would give a confidence or no-confidence vote to the minister.