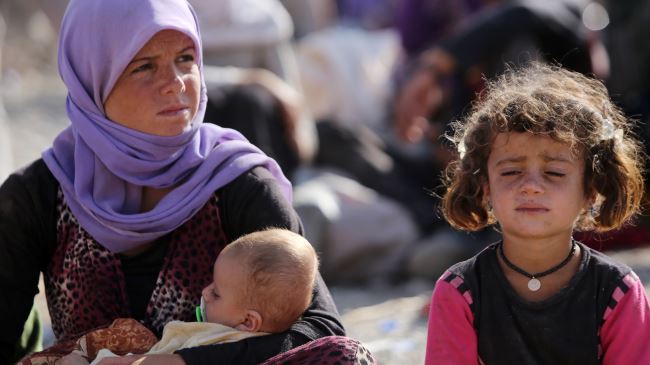 Takfiri ISIL militants have kidnapped up to 3,000 women and girls from the Izadi community in northern Iraq over the past two weeks, Amnesty International says.

Donatella Rovera, the Amnesty’s senior crisis response adviser, said the kidnappings took place in villages east of Mount Sinjar, where people have taken up arms against the ISIL terrorists.

The ISIL militants launched attacks against Izadi Kurds on August 3, pushing thousands of people out of their villages near the country’s border with Syria. Survivors fled to Mount Sinjar, where they were besieged for several days.

She also stressed that the militants also kidnapped entire families in the region who could not manage to flee, adding the fate of thousands of abductees has remained uncertain.

“The victims are of all ages, from babies to elderly men and women,” she said.

The Amnesty official also pointed out that women and girl are being held separately from the men in Tal Afar area, which is under the control of the Takfiri militants.

She also voiced fear that the men “may have been executed,” and said the kidnapping is a “crime” under international law.

Some 200,000 people fled to safety in semi-autonomous Kurdistan region, while thousands others crossed the Syria border. A large number of others remain on the mountain.

Meanwhile, local Kurdish intelligence sources say they have received information that women captured by Takfiris are being sold to traffickers for between USD 500 and USD 43,000 to work in bordellos across the Middle East.

In addition, several women have reportedly been forced to marry the ISIL militants.