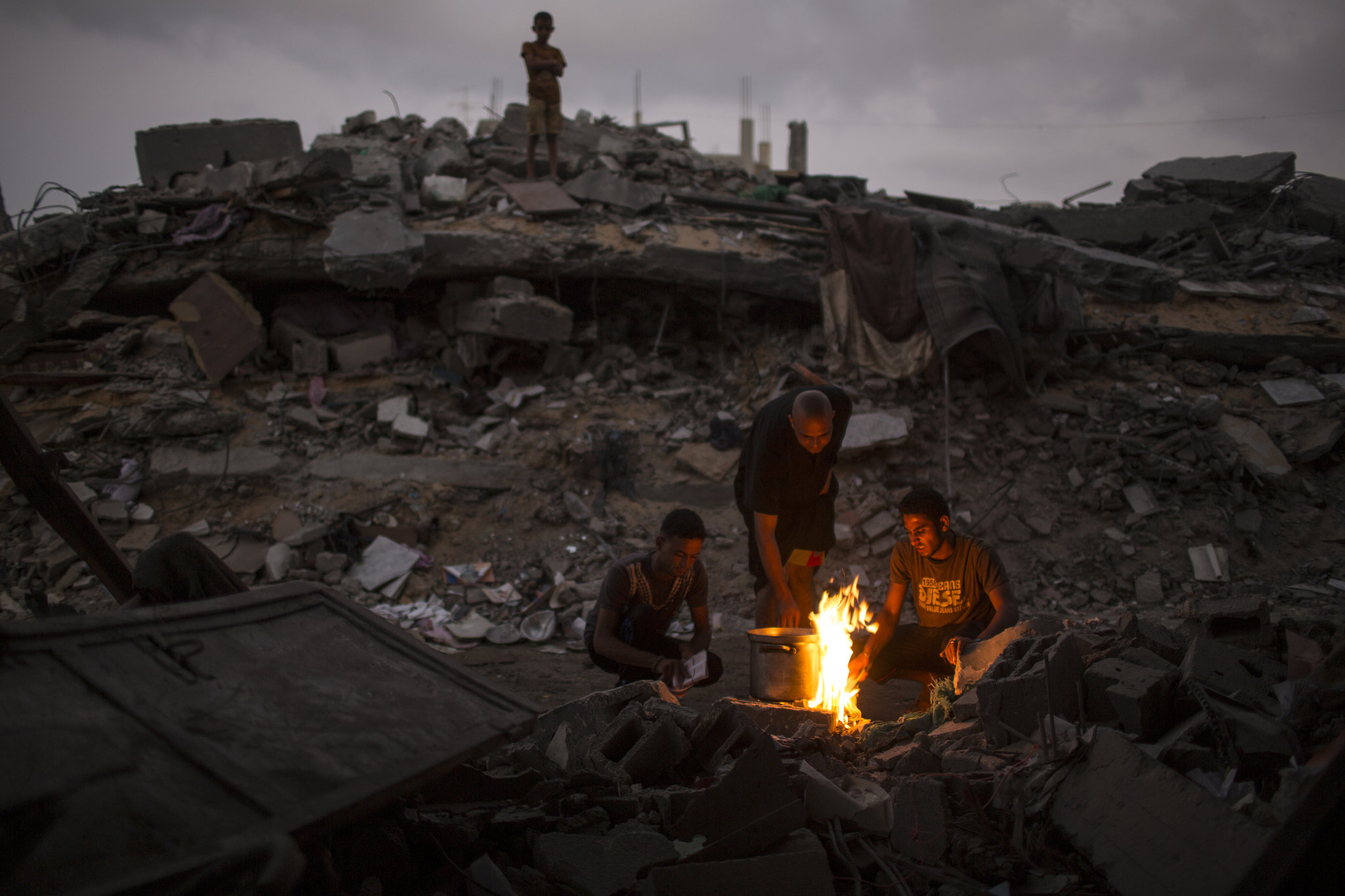 GAZA CITY — Telltale signs of the displaced are everywhere in Gaza.

Tiny sandals are scattered on the doormat of a lawyer’s office above downtown Gaza City’s main street: The tiny feet belong to the children who have been living inside since July 20. Upstairs, in the dental laboratory where Mohamed Efranji fashions crowns and veneers, there are trays of onions, potatoes, red peppers and tomatoes to feed three families who now call it home.

At the Rimal Salon at the edge of the Beach refugee camp, two hairdressers have brought their 10 younger siblings to stay. On Tuesday, their mother was making macaroni on a camp stove in a mirrored back room where brides usually primp. Around the corner, a colorful blanket blocked a doorway to a long-closed Internet cafe where 13 more people have set up house in two high-ceiling rooms that lack both running water and working electric outlets.

Scores of families have hung sheets and scarves from every available tree and pole to create shady spaces on the grounds of Al Shifa Hospital; in the unauthorized camp, a 3-month-old slept one recent morning in a wire crib lined with cardboard. 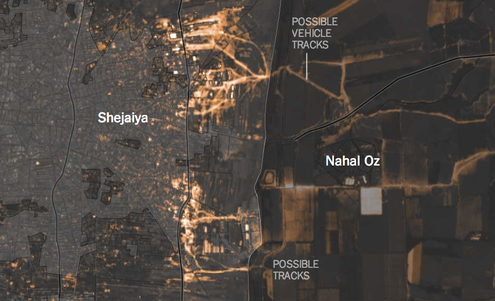 On Sunday, more than 235,000 people were still crammed into 81 of the United Nations’ 156 schools, where classes are supposed to start next Sunday. “The chances of that,” acknowledged Scott Anderson, deputy director of the agency that runs them, “are zero.”

After a month of fierce fighting between Israel and Palestinian militants that killed more than 1,900 Gaza residents, the extension of a temporary cease-fire through Monday was a great relief. But with an estimated 11,000 homes destroyed and many more severely damaged, Gaza’s housing and humanitarian crises are just beginning, and the uncertainty over the timing and terms for a more durable truce makes recovery planning elusive.

“Our fate at the end will be in the street,” lamented Alia Kamal Elaf, a 35-year-old mother of eight who has been staying at a school since fleeing the Shejaiya neighborhood in east Gaza City at the onset of Israel’s ground incursion on July 17.

The destruction has been far more severe than in previous rounds of Israeli attacks, especially in Shejaiya, the northern border town of Beit Hanoun and the southeastern village of Khuza’a, where little at all is left. Palestinian leaders plan to ask international donors for $6 billion at a conference scheduled for September, but there are many challenges money cannot solve.

The Hamas-run government that ruled Gaza since 2007 resigned in June, but the Palestinian Authority has yet to take control of its ministries. So who will assess damage or coordinate reconstruction?

Israel currently bans the import of construction materials for private projects, citing security concerns. In any case, several of Gaza’s cement-mixing plants and other factories that make doors, windows and floor tiles have been reduced to rubble.

Many aid workers think cash grants would provide the most efficient relief: People could fix homes that are still standing, rent new spaces or offset expenses as they cram in with relatives. But the United States will not give cash directly to people because it is too complicated to determine their possible connections with Hamas, which is deemed a terrorist organization by Washington.

“We’ll get lots of money to rebuild homes we can’t rebuild, but we won’t get the money to help these people help themselves,” said Robert Turner, director of Gaza operations for the United Nations Relief and Works Agency, which provides education, health and other services to the 70 percent of Gaza residents who are classified as refugees. “You cannot do widespread shelter construction unless construction material is free and available in the local market. Which it’s not, and is it ever going to be?”

Turkey, Qatar and other nations have offered to send mobile homes. But Mr. Turner sees this as a wasteful step in the wrong direction. Each unit costs about $15,000, he said; the agency’s standard rental subsidy in Gaza is $150 per month, or $3,600 for two years. A permanent home can be built for $40,000.

“There are three problems,” Mr. Turner said. “People hate them, they’re really expensive, and you set up these ghettos.”

The agency is facing a similar dilemma over its shelters, where some families have now been for 36 days. About 350 children have been born at the shelters; on Wednesday, United Nations employees staged a boisterous wedding for one displaced couple. Still, there are no showers.

Mr. Anderson, Mr. Turner’s deputy at Unrwa, said Thursday that he planned to start having showers installed in the coming days — at least at the 15 schools across the strip where the agency expected to keep shelters open even after the conflict officially came to a close. Already, he is placing a nurse and health educator at each site in the hope of staving off outbreaks of meningitis, lice and scabies. Soon, the agency will replace daily distribution of canned food, which costs $1.60 per person, with cheaper, twice-weekly boxes of pantry supplies.

“We cannot throw people out of the shelters,” Mr. Anderson said. “It’s the gray area of wanting to do the best we can to provide dignified living conditions, but also not wanting to turn the shelters into hotels where people want to stay.”

There seems to be little danger of that.

People at the schools complain of incessant flies and fetid bathrooms. Ms. Elaf, the woman worried about ending up on the street, said she has but one mattress for her eight children, ages 8 to 16. Another woman staying at the same school yanked down her 7-year-old son’s shorts to show an angry red sore on his thigh. The classrooms smell. Hallways are filthy and often wet. Family fights are becoming more frequent.

Conditions are worse on the grounds of Shifa Hospital, where neither food nor water is provided to the makeshift camp that sprawls outside the internal medicine building, next to the X-ray department, between the emergency room, the morgue and the maternity ward. Many of the tents are made from sheets that say “Palestinian Health Ministry” in Arabic.

The brothers Hamouda have an actual tent, provided, they said, by a “do-gooder” in week four of their stay. Half the ground is covered with cardboard, the other half with woven mats. In the corner is an old soda bottle half filled with fiery red pepper sauce, a Shejaiya standard.

The oldest, Muhammad, 48, said that if the cease-fire held, he would go to the spot where the family’s home was “and wait for a tent — I’ll put a tent in the street and sit there.”

But Moamar disagreed. “We will stay here until they bring a solution for us,” he said. “My opinion is that we stay here, as a pressure tool.”

Their wives have been staying with relatives, as an estimated 200,000 of the temporarily displaced have done. Even this, considered the best alternative, has its downside: Religious women and girls must wear long sleeves and cover their hair at all times because they are not in their own homes; many are not allowed to sit in courtyards or on stoops because they do not know the neighbors.

Those who have managed to find spots to rent said they were paying double the prewar rates: One group of 12 was pulling furniture from the Beit Hanoun rubble the other day to take to a fourth-floor unit in the Sheikh Zayed complex, with no elevator, for $200 a month. Hani Zeyara, who is from Shejaiya and slept for weeks at the makeshift Shifa Hospital camp or in a park, said he had finally found an empty store: 260 square feet for $100 a month.

Adel al-Ghoula, 28, has already pitched a tent, of sorts, in front of the pile of debris that used to be the home where he lived from the age of 13, just across the road that runs close to Gaza’s eastern boundary. He used wire to tie two-by-fours to the iron fence lining the road, and then to tie colorful cloths, many of them torn or singed, to the wood. Inside, wooden pallets are propped on rocks and strewn with worn cushions, forming seats in the shade.

The date, grape, olive, fig, walnut and lemon trees are all gone. A stone arch doorway and wrought-iron gate are basically the only things left standing of what Mr. Ghoula said had been a four-story building housing six families — 50 people — as well as several first-floor businesses. Mr. Ghoula had owned two sewing machines and made women’s shoes.

“This is the remains of my computer,” he said, picking up a piece of black plastic. “This is my daughter’s handbag.” It was red, with sparkles; she is 4.

He put a sign on the pile, “Home of the al-Ghoula Family,” to ward off looters, perhaps attract assessors or just signal to neighbors: We are still here.

“We must rent a place, but we should still come here every day and sit here,” Mr. Ghoula said as a stranger on a donkey cart stopped for a drink of fresh water. “To receive people. To tell the world: We are rooted in our land, until death.”