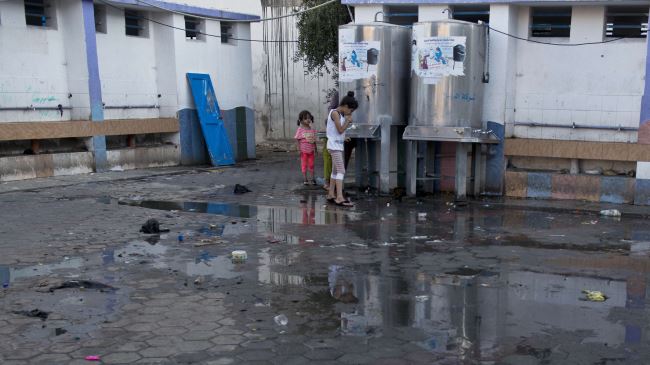 The humanitarian situation in the besieged Gaza Strip is getting worse more than a week after a ceasefire was agreed between Israelis and Palestinians.

Most of the blockaded enclave has been without power for 18 hours a day since Israel attacked the territory’s sole power plant on July 29. The damage is said to take up to a year to fix.

On Saturday, the Palestinian Energy and Natural Resources Authority said it will be able to continue supplying Gaza with six hours of electricity a day for another two months.

People in Gaza also face a shortage of water, with reports indicating that various diseases are spreading among the population that has been displaced due to the Israeli war.

According to reports, the displaced Palestinians living in UN-run schools struggle for access to water. They say there is no water in the bathrooms and that the dirt in the area causes serious problems for them.

“All my children got sick here because of the dirt and the lack of hygiene, they’ve all got skin infections and scabs,” said Faten al-Masri, a Palestinian mother.

Monzer Shoblak, an official from the local water board, said that the damage from Israel’s month-long offensive against Gaza meant that Gaza was pumping 50 percent less water.

On Sunday, the UN’s Under-Secretary-General for Humanitarian Affairs and Emergency Relief Coordinator Valerie Amos said it may take months to repair the damage Israel inflicted on Gaza’s infrastructure.

She also said that 97 UN installations, including health centers and schools, were damaged in the Israeli war.