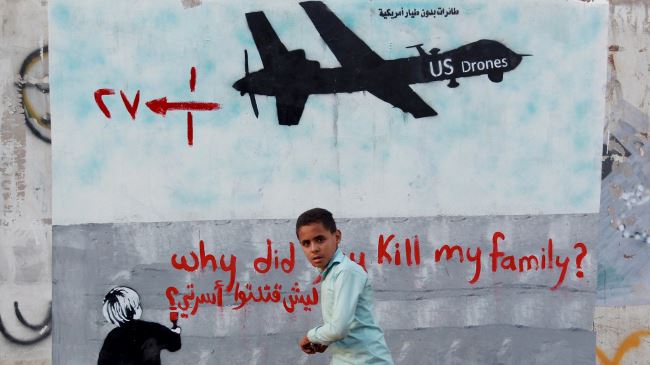 At least ten people have been killed in separate assassination drone strikes by the US in the eastern and southern parts of Yemen.

“The three armed men were travelling in a vehicle along a desert stretch between Yemen and Saudi Arabia’s border when the drone shot two rockets at them. All three are dead,” a local official said on the condition of anonymity.

Moreover, seven suspected militants were killed in two airstrikes in the country’s south.

An unnamed Yemeni security official said three suspected militants were killed when an airstrike hit their vehicle north of Ahwar town in the southern Abyan Province.

Four other suspects died when another airstrike hit a gathering of militants in the same region.

Washington acknowledges using assassination drones as part of its official targeted killing campaign in Muslim countries to eliminate what it regards as militants. However, it does not comment publicly on individual cases of the aerial bombing campaign.

The US administration claims that its assassination drones target al-Qaeda militants, but local sources say civilians have been the main victims of the non-UN-sanctioned airstrikes.

In February, the Human Rights Watch (HRW) called on Washington to investigate a fatal drone strike on a wedding ceremony in Yemen in December 2013. The HRW said in a report, dubbed “A Wedding That Became a Funeral: US Drone Attack on Marriage Procession in Yemen,” that the December 12, 2013, attack killed a dozen men and wounded at least 15 others, including the bride.

Last October, the HRW said the US drone strikes in Yemen had led to the death of many civilians over the past years in a blatant violation of international law.