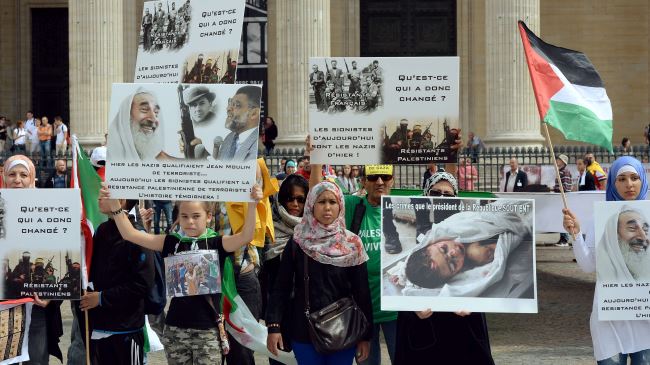 Large groups of protesters have marched in France and the United States to denounce the Tel Aviv regime’s military campaign against the Palestinians in the besieged Gaza Strip.

On Saturday, a group of pro-Palestinian demonstrators gathered in front of the Pantheon in Paris to express their support for Palestinian resistance against Israel.

The protesters also called for the boycott of all Israel-made products. They said Western propaganda machines try to make people forget about the seven-year siege of the Gaza Strip.

The demonstrators also lashed out at the French government for supporting Israel in its crimes in the blockaded Palestinian coastal enclave.

The development came on the same day that pro-Palestinians marched through the streets of Los Angeles to denounce the bloodshed against Gazans.

Elsewhere in Bangladesh’s capital, Dhaka, tens of thousands of protesters took to the streets on Saturday to demonstrate against Israeli airstrikes on the Gaza Strip.

Protesters carried black flags and held banners, some of them reading “Stop Genocide in Gaza,” and chanted anti-Israel slogans.

Nearly 2,000 Palestinians, including 470 children, have lost their lives and more than 10,200 have been wounded since the Israeli military unleashed fatal military assaults on the Gaza Strip more than a month ago.