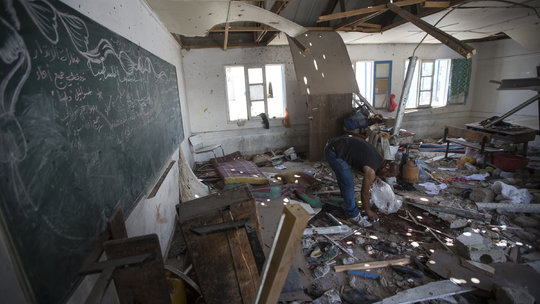 A look at the increasingly tense relationship between the United Nations and Israel as the violence continues in Gaza. Video Credit By Quynhanh Do on Publish Date July 31, 2014. Image CreditWissam Nassar for The New York Times

JERUSALEM — The fighting is barely over in the latest Gaza war, with a five-day cease-fire taking hold on Thursday, but attention has already shifted to the legal battlefield as Israel gears up to defend itself against international allegations of possible war crimes in the monthlong conflict.

Israel has excoriated the United Nations Human Rights Council over the appointment of Prof. William Schabas, a Canadian expert in international law, to head the council’s commission of inquiry for Israel’s military operations in the Gaza Strip.

The broader struggle will be over what some experts describe as Israel’s “creative” interpretation of international law for dealing with asymmetric warfare in an urban environment. More than 1,900 Palestinians were killed in the recent fighting, a majority of them believed to be civilians, while on the Israeli side 64 soldiers and three civilians were killed.

Israeli leaders view the Human Rights Council as hopelessly biased against Israel and say statements made in the past by Professor Schabas rule him out as a fair adjudicator. In one prime example, Professor Schabas was filmed in New York almost two years ago saying Prime Minister Benjamin Netanyahu was his “favorite” to be in the dock at the International Criminal Court.

“The report of this committee has already been written,” Mr. Netanyahu said this week. “They have nothing to look for here. They should visit Damascus, Baghdad and Tripoli.”

Mr. Netanyahu has repeatedly accused Hamas of a “double war crime” for targeting Israeli civilians with its rockets and, he says, using Gaza’s civilians as a human shield for its activities.

Yuval Steinitz, Israel’s minister for strategic affairs, said that paradoxically, the only way Professor Schabas could prove he was worthy of the job would be by resigning from it.

Responding to the accusations by telephone from London, Professor Schabas said Thursday: “Everybody in the world has opinions about Israel and Palestine. I certainly do.”

He added: “I was recruited for my expertise. I leave my own personal views at the door, as a judge does.”

Rejecting assertions that he is “anti-Israeli,” he said he had lectured in Israel often and was on the board of the Israel Law Review. “I don’t think everyone in Israel agrees,” he said. “I would fit in well there.”

A similar Human Rights Council inquiry into the 2008-9 war in Gaza led to the Goldstone Report. Named for Richard Goldstone, the South African jurist who led that inquiry, the report said it found evidence of potential war crimes committed by both Israel and Hamas. It accused Israel of intentionally targeting civilians in Gaza as a matter of policy, a blow that Mr. Netanyahu once described as a strategic challenge.

Mr. Goldstone later retracted that central accusation, writing in The Washington Post, after Israeli investigators presented counterevidence, “If I had known then what I know now, the Goldstone Report would have been a different document.” Other members of the Goldstone panel stood by the report.

In Israel’s latest aerial and ground campaign, several episodes already stand out as likely focuses of international attention, including several deadly Israeli strikes at or near United Nations schools in Gaza where thousands of civilians were taking refuge, actions that the secretary general of the United Nations, Ban Ki-moon, has denounced as “outrageous, unacceptable and unjustifiable.”

Critics have also pointed to the Israeli military’s policy of bombing family homes it said were being used by Hamas operatives or other groups as “command and control centers” or for weapons storage, causing heavy casualties among civilians, including many minors and women, despite a system of issuing prior warnings. B’Tselem, an Israeli human rights organization, asserted in a recent report that the practice violated the international legal principles of distinction and proportionality, calling into question the clear military nature of the targets and whether the military gains were significant enough to justify the deaths of civilians.

And questions have been raised about a particularly aggressive and deadly Israeli assault on the southern Gaza Strip city of Rafah on Aug. 1 as Israeli forces pursued a Hamas squad they believed had captured a soldier. Prof. Emanuel Gross, an Israeli expert in military law and a former military judge, said in a recent interview that the firepower used in Rafah to try to return one soldier did not seem justified, morally or legally, and appeared to be “disproportionate.” (The soldier was later declared killed in action.)

In a move that some Israelis hope will take the wind out of the Human Rights Council inquiry and other potential ones by outside groups, Israel’s attorney general and the military advocate general are setting up an independent mechanism for investigating the events in Gaza, and the state comptroller also plans an inquiry.

But the Israeli military is not waiting. Lt. Col. Eran Shamir-Borer, head of the strategic affairs branch in the international law department at the Military Advocate General’s Corps, said in an interview that a recently established military committee of fact-finding teams, independent of the chain of command and made up largely of reservists, is already investigating certain cases and could have some preliminary findings as early as Friday.

Speaking at military headquarters in Tel Aviv, Colonel Shamir-Borer said that since Israel’s 2006 war in Lebanon, the army’s legal counselors have become more involved in operational activity before and during military campaigns, as well as in the aftermath, training commanders, reviewing planned targets and deploying to the Gaza border to work with commanders at the division level during the recent conflict.

“We know the law very well,” Colonel Shamir-Borer said, “but it is always more complex than in the textbooks.”

“The modus operandi of our enemy,” he said, referring to Hamas, “is by definition defying the laws of armed conflict.”

Colonel Shamir-Borer said that the planned bombing of homes was reviewed house by house, based on intelligence and other considerations, and guidelines were set for some of the attacks, for example, determining that they could be carried out only at night, or with a drone to check that the residents had evacuated.

Individual cases where many family members were nevertheless killed, such as a July 13 airstrike on a home that killed 18 members of the Batsh family and severely wounded Tayseer al-Batsh, the Hamas police chief in Gaza, are now being examined. In each case the teams will decide if a criminal investigation is warranted. At this stage, the policy of targeting houses is not under review.

Colonel Shamir-Borer said his department had invited nongovernment organizations to submit complaints and had also approached them.

“You know the international community is going to raise allegations,” he said. “You need answers.”