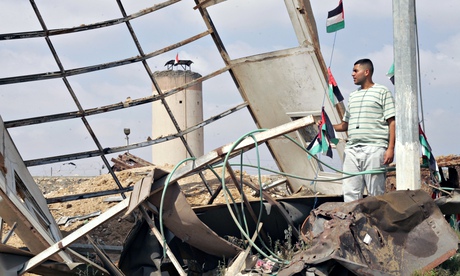 A Palestinian man looks at the damage to a building in Rafah in the Gaza Strip. Photograph: Ibrahim Khatib/Demotix/Corbis

Hamas and Israel have agreed five more days of truce to allow further talks after a tense final countdown to the end of the current 72-hour ceasefire on Wednesday night.

The current truce, which is the eighth bid to stop the five-week long war, had been due to expire at midnight, and rocket fire on Israel two hours before its end prompted fears of a new outbreak of violence.

There was confusion immediately after the extension of the ceasefire was supposed to come into effect with a series of rockets targeting southern Israel and Israeli military launching air strikes in Gaza in retaliation.

Hamas, the Islamist organisation in power in Gaza, had earlier denied they had launched rockets.