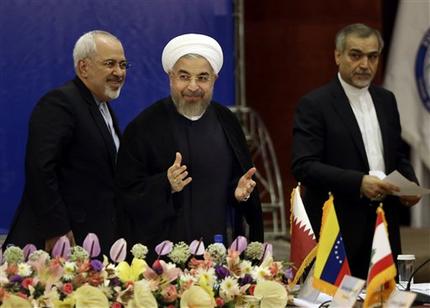 TEHRAN, Iran (AP) — Iranian President Hassan Rouhani has offered his harshest criticism yet of hard-liners opposed to making a deal over its contested nuclear program with world powers, saying they should go “to hell.”

Rouhani made the comments Monday while addressing an annual meeting of Iranian ambassadors, calling the hard-line critics “political cowards.”

Rouhani said: “Anytime there is going to be negotiations, a handful say we are shaking. Well, to hell. Go and find a warm place for yourself. What should we do?”

Hard-liners have opposed the interim deal struck last year, saying Tehran offered too many concessions in return for too little. However, Supreme Leader Ayatollah Ali Khamenei, who has the final say on all state matters, has backed the nuclear negotiating team.