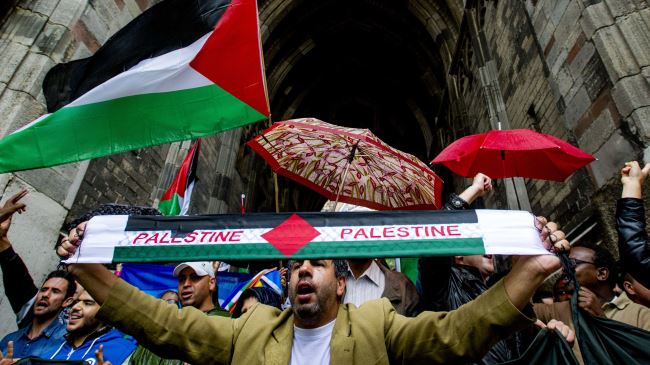 Pro-Palestinian demonstrators march through the centre of Utrecht, the Netherlands, on August 10, 2014.

The Palestinian ambassador to Iran says unity among Muslim states is the sole way to resolve the issue of Palestine and liberate the holy city of al-Quds (Jerusalem) from Israeli occupation.

On Monday, Salah Zawawi criticized Islamic countries for failing to adopt proper stances with regards to the situation in the war-stricken Gaza Strip, saying it is only through unity among Muslim countries that the issue of Palestine could be addressed.

What is taking place in Islamic territories today is a Western plot aimed at weakening the religion of Islam, added the Palestinian official.

Zawawi further hailed Palestinian resistance movements for standing against Israeli occupation and atrocities, stressing that Tel Aviv’s days are numbered and the countdown has begun for the regime’s annihilation.

Around 1,940 Palestinians, mostly civilians, have so far been killed and nearly 10,000 others injured since Israel first launched its military assaults against the Gaza Strip on July 8.

Latest tallies show that at least 450 Palestinian children have lost their lives in the Israeli attacks against the impoverished Palestinian strip. Children also make up almost one-third of the injured.