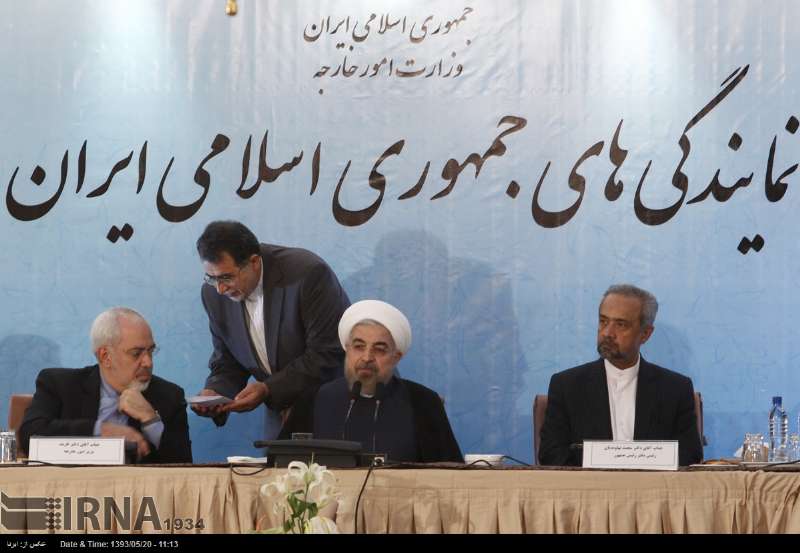 TEHRAN (Tasnim) – Iranian President Hassan Rouhani reaffirmed his administration’s commitment to pursue the policy of “constructive interaction” with the world, but at the same time ensured that the national interests will be upheld in that approach.

“The Iranian administration is resolved to have constructive interaction with the world,” President Rouhani said, addressing a gathering of Iranian ambassadors and heads of mission to the foreign countries, here in Tehran on Monday.

He noted that Iran’s neighboring countries and the regional states have priority in this approach, and referred to the diplomatic efforts Tehran has made over the past 11 months to strengthen ties with the neighbors.

Rouhani added that while Iran seeks to forge “closer ties” with the international community, the country at the same time will steadfastly safeguard its “national interests and security” with the efforts of its ambassadors abroad.

Pointing to the nuclear negotiations with world powers, the president stressed that the pursuit of “cordial ties and a win-win” approach is not confined to the nuclear talks alone, but include all aspects of diplomatic relations.

As regards the marathon nuclear negotiations between Tehran and the Group 5+1 (Russia, China, the US, Britain, France and Germany), the president asserted that Iran is “seriously after talks” and wants the standoff on its peaceful nuclear program resolved.

“The world should know that we have serious resolve to settle the issues, but we will not by any means retreat from the Iranian nation’s inalienable rights,” he underlined.

Rouhani further made it clear that Tehran “will not accept negotiation for negotiation.”

On July 18, after more than two weeks of intensive diplomatic negotiations in Vienna, Iran and the six nations agreed to continue talks for another four months after failing to meet a July 20 deadline.

The two sides decided to extend the nuclear talks until November 24 in the hope of clinching a lasting, comprehensive deal on Iran’s nuclear energy program.