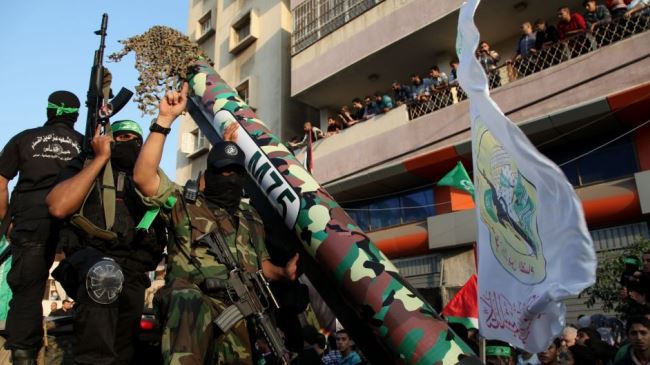 Hamas forces display an M-75 home-made rocket in a military parade in Gaza City on November, 14, 2013.

A senior Iranian commander says the entire Israel is within the range of the missiles of the Palestinian resistance movement.

“Today, all the occupied territories are within the range of the missiles of Palestinian resistance,” said Deputy Commander of the Islamic Revolution Guards Corps (IRGC) Brigadier General Hossein Salami on Saturday.

The Iranian commander argued that at present all the residents of the occupied territories feel the same level of insecurity and Israel has become a securitized environment.

Israel has been incapable of controlling the barrage of Palestinian rockets and preventing the Islamic resistance forces from infiltrating into its military bases through a large number of tunnels, the commander pointed out.

Salami questioned Israel’s claim that Palestinian fighters had created 32 tunnels and the regime had destroyed all of them.

“It is predicted that the resistance possesses equipment and capabilities which it will put in action if the war gets out of control,” the commander pointed out.

Salami said despite the technologies and equipment Israel possesses and the intelligence operations it carries out, the Palestinians have dug hundreds of kilometers of tunnels, while Tel Aviv has failed to target major Palestinian figures or discover and eliminate the resistance movement’s warehouses filled with rockets and missiles or even a large part of their tunnels.

“This shows that the Palestinian resistance movement has reached such intelligence maturity that has brought the intelligence service of the Zionist regime to its knees,” he noted.

He said the West Bank will surely go through the process Gaza went and it will undoubtedly take up arms and enter the battle against Israel, adding, “At present, they (West Bank) are fighting with stone, but Gaza, which now possesses missiles and drones, also used to fight with stones and the same will happen out there.”

The Iranian commander pointed to Israel’s 33-day war on Lebanon in July 2006 as one of the major failures of Israel as it ruined the image of the regime’s military forces as the world’s fifth powerful army.

The achievements of Lebanon’s Hezbollah in the 2006 war inspired the Palestinians to resist Israel in the 22-day war on Gaza in 2008 and demonstrate better military capabilities in response to the regime’s 2012 aggression against the coastal sliver, Salami added.

He also slammed Tel Aviv’s sway over Washington, adding, “Undoubtedly, it has been years that the Middle East policies and strategies of the US have been hostage to the policies of Israel.”

Referring to the atrocities of the ISIL Takfiri terrorist group in Syria and Iraq, Salami said the ISIL was established through the US support in order to disintegrate the government of Iraq, and Washington sought to reduce Iran’s regional sway with the help of a reactionary government.