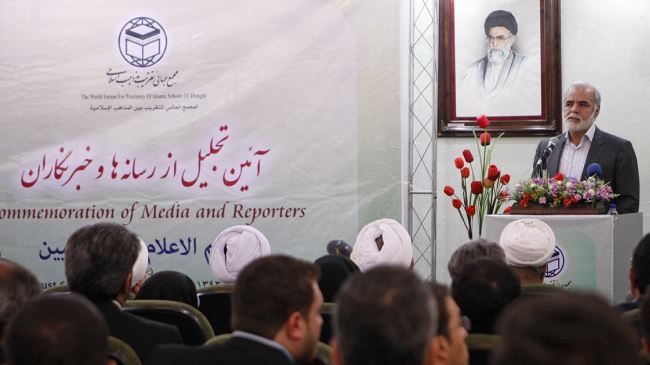 Iran has commemorated the National Journalists’ Day on the anniversary of the killing of an Iranian reporter in Afghanistan, Press TV reports.

August 8 was designated the National Journalists’ Day in Iran following the murder of Mahmoud Saremi, the correspondent of the Islamic Republic News Agency (IRNA), along with eight Iranian diplomats, by Taliban militants in Mazar-i-Sharif in northern Afghanistan in 1998.

Since the US-led invasion of Afghanistan in 2001, over 20 journalists alone have lost their lives in the war-ravaged country. Amongst them was Press TV’s cameraman Farhad Taghadosi.

Taghadosi died in a hospital in the Afghan capital Kabul after Press TV’s office came under rocket attack in 2011.

Also in 2012, Press TV lost another correspondent, Maya Nasser, who was killed by militants in the Syrian capital Damascus, but he was not the only killed there. Over 150 journalists have been killed since the start of the foreign-backed militancy in Syria in March 2011.

“Every story is like a war that has two sides. So, good journalism requires covering both sides, not like the case in Gaza where a part of the Western media is trying to cover one side, the Israeli side, and ignoring what is going on inside Gaza. That is called more like deceiving the public than good journalism,” said Amir Mehdi Kazemi, a Press TV correspondent.