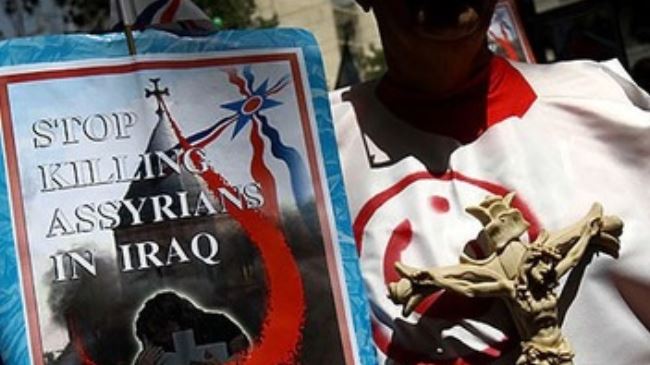 Iranian Assyrians have held a rally in protest to the atrocities committed by the ISIL militants against Christians in Iraq and Syria, Press TV reports.

Hundreds of Iranian Assyrians gathered in front of the United Nations office in the Iranian capital Tehran on Thursday, holding placards and chanting slogans in support of the Christian community in the two Arab countries, while calling for practical measures against the Takfiri terrorists.

The demonstrators also condemned the international community for turning a blind eye to the crimes committed by the ISIL militants, and demanded justice and global attention to the plight of the Assyrians in Iraq.

The international community is “pretending to be blind, deaf and dumb…. [It is] ignoring all the brutalities committed against our people,” Yonathan Betkolia, an Iranian MP and secretary general of the International Union of Assyrians, told Press TV.

The ISIL Takfiri terrorists have brutally murdered hundreds of Iraqi Assyrians and held their women and children as hostages since they took over the Iraqi city of Mosul. The terrorists have also confiscated their properties and forced thousands of the Iraqi Christians to flee the land which they have inhabited for thousands of years.

“We are worried about Assyrians and other Christians in Iraq and Syria who have been attacked by the ISIL terrorists. It is painful for us,” a protester said.

On Thursday, the ISIL terrorists seized Iraq’s largest Christian town, Bakhdida, also known as Qaraqosh, in Iraq’s northern province of Nineveh, following the retreat of Kurdish troops from the semi-autonomous Kurdistan region, who were protecting the area for the last two months.

The Takfiri ISIL militants forced thousands of civilians to leave the region.

The terrorists also took control of the towns of Tal Keef, Bartella and Karamlish, all located near the militant-held city of Mosul.

An estimated 100,000 Christians have been forced to flee Nineveh Province to Kurdistan region.