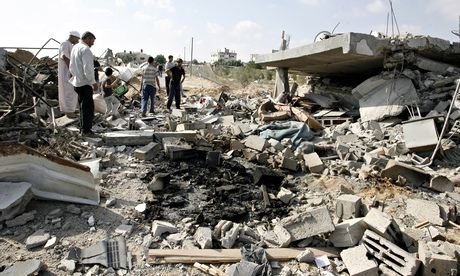 Palestinians try to salvage belongings from under the rubble of destroyed buildings in Rafah. Photograph: Abed Rahim Khatib/NurPhoto/Rex

A ceasefire in the Gaza Strip has entered a second day as Israeli and Palestinian delegations prepare for talks in Cairo to try to extend the 72-hour truce.

The ceasefire, which came into effect on Tuesday, has brought a temporary halt to a month of fighting during which 1,875 Palestinians and 67 Israelis were killed.

Delegations are now ready for what are expected to be tough talks aimed at securing a permanent ceasefire after the three-day window closes.

Officials on both sides confirmed they were sending small teams to Cairo, but they bring conflicting demands. The Palestinians insist that Israel end its eight-year blockade of Gaza and open border crossings, while Israel wants Gaza fully demilitarised.