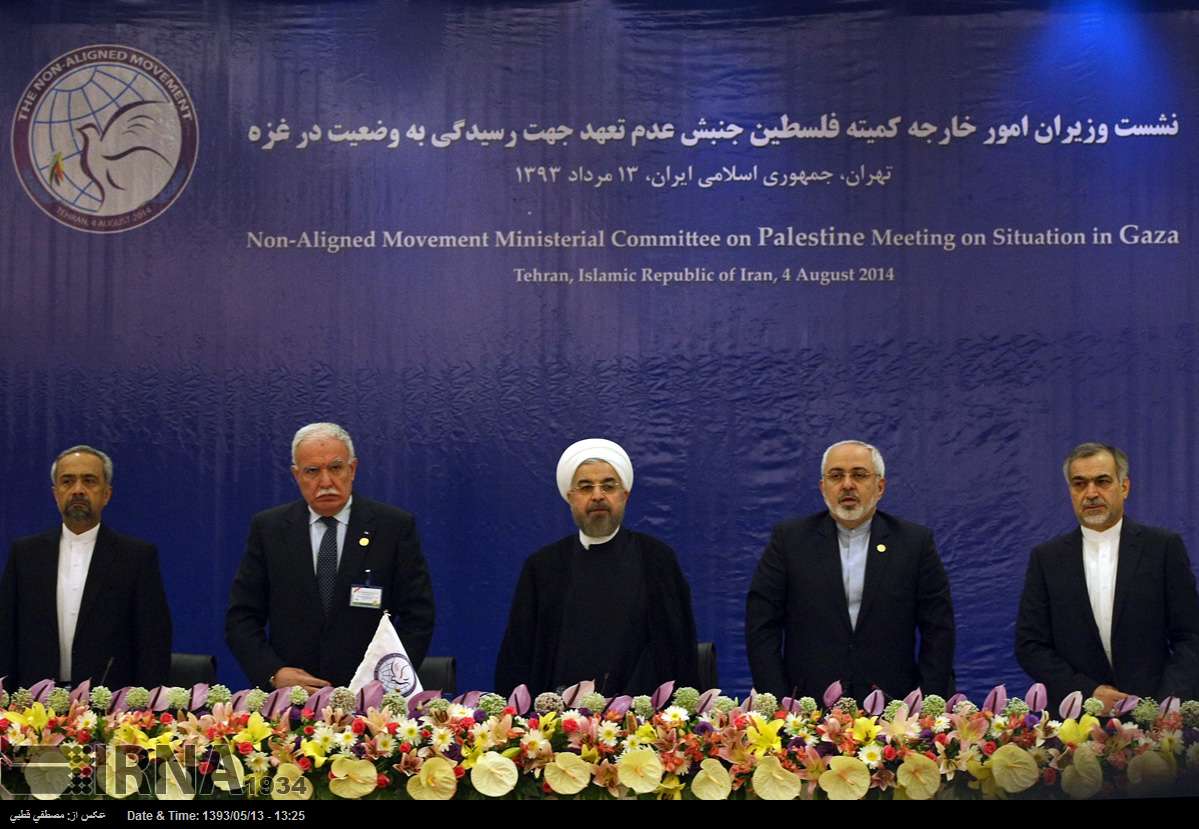 Tehran, Aug 4, IRNA – President Hassan Rouhani here on Monday stressed that the Zionist regime has been pounding the Palestinian territory, Gaza Strip in particular, with most heavy weapons in an unfair and unequal war.

The President made the remarks while addressing the one-day foreign ministerial meeting of the Palestine Committee of the Non-Aligned Movement.

He expressed sorrow that the ruthless attacks, started during the holy fasting month of Ramadan, are in clear violation of most basic human values. They are also against the international humanitarian rights standards.

He said during its criminal offensives, the Israeli army targets children as part of a pre-planned scheme.

He said the Zionist army is going on with its old policy of massacre, annihilating the Palestinian nation while destroying non-military targets, residential units, medical units, schools and even media and aid teams.

He believed the inaction and neutral stances of international bodies especially the United Nations Security Council regarding Israelˈs anti-human crimes have further emboldened the regime to dare even prevent humanitarian aids like foodstuff and medicine to Gaza.

He noted that the Palestinian nation has been denied its most basic rights for the past six decades and suffered the Zionist regimeˈs brutal attacks under the most sever pressures.

The President said the continuing inaction and indifference of the UN Security Council, resulted from collaboration of some of its members with the Zionist regime, is encouraging Tel Aviv to create the most adverse situation in Palestine.

He said the UNSC silence and inaction regarding the ongoing catastrophe in Palestine especially in Gaza highlights the spirit of injustice prevailing the body.

President Rouhani underscored that as long as the US is collaborating with certain UNSC members in ignoring realities and defending oppressors at any price, there will be no hope for any improvements in the present situation.

He stressed that the current plight of Gazans is just part of an old-established approach by the Zionist regime to ignore the Palestinian identity of the nation by changing its demographic and geographic patterns.

President Rouhani underscored that Iran has always believed that putting an end to the longest conflicts in the Middle East and establishing a fair and sustainable peace in the region will only be attained by settling the Palestinian issue through ending the occupation of all Palestinian territories, confirming the nationˈs right for self-determination, return of displaced Palestinians to their ancestral homeland and establishment of the unified state of Palestine with the Holy Qods as its capital after holding a referendum for its inhabitants.

The President further stressed that Iran has mobilized efforts since the very beginning of the latest Israeli offensive to Gaza to encounter oppressors who are imposing a siege against its people.

The emergency meeting of Palestine Committee of the Non-Aligned Movement at foreign ministerial level opened in Tehran this morning.

Iranˈs Foreign Minister Mohammad-Javad Zarif is presiding the meeting which is focusing on the Gaza crisis and the ways for dispatching humanitarian supplies to the defenseless people of the besieged strip.

Representatives from 40 countries along with NAM ambassadors are also participating in the day-long meeting.

The Zionist regime launched large-scale offensive on the Gaza Strip since July 8 targeting civilians, health centers and schools from the air, land and the sea killing over 1,700 Palestinians and injuring several thousands.