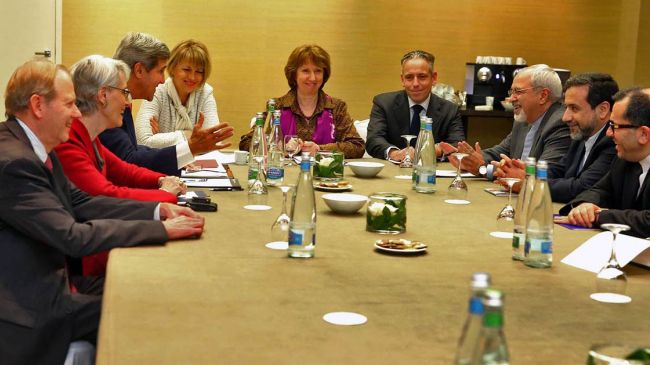 Iran, Sextet may meet in New York in September: Araqchi

A photo of the Iran-Sextet negotiations on November 9, 2013.

A top Iranian nuclear negotiator says representatives of Iran and the Sextet of world powers are likely to meet on the sidelines of the UN General Assembly session in New York in late September.

“The meeting between Iran and the P5+1 (permanent members of the UN Security Council plus Germany) is very likely to be held on the sidelines of the UN General Assembly session but its level is not determined yet,” said Seyyed Abbas Araqchi, Iran’s deputy foreign minister for legal and international affairs, on Monday.

He added that the meeting may come in the form of bilateral talks between Iran’s Foreign Minister Mohammad Javad Zarif and EU foreign policy chief, Catherine Ashton, multilateral, or even lower level technical talks.

Commenting on the possibility of prolongation of the nuclear talks, Araqchi noted, “What is obvious is that the other side calls for a longer time, while we call for a shorter time for the talks…”

Iran and the Sextet are to resume their negotiations to discuss ways of reaching a final agreement over Tehran’s nuclear energy program in September. Iran’s right to enrich uranium is among the bones of contention between the two sides.

They clinched a landmark interim deal in Geneva, Switzerland, on November 23, 2013. The agreement took effect on January 20 and expired six months later on July 20.