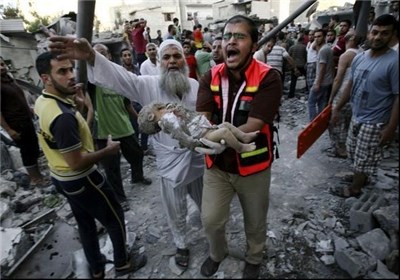 TEHRAN (Tasnim) – Israel continued to pound the Gaza Strip for the 28th consecutive day, having killed more than 1,822 Palestinians, including 400 children.

On Monday, Israeli forces targeted two mosques in and around the Gaza City, killing at least one Palestinian. Two others were also killed in separate attacks in the city.

In the southern city of Rafah, a child was killed and four others injured in another Israeli attack. At least 12 more people also lost their lives in the northern city of Jabalia.

Israel has been targeting the Gaza Strip with military attacks since July 8. Apart from the fatalities, the air, sea and land strikes by Israel have so far injured 9,400 people.

Israel has hit 4,686 sites in the blockaded enclave since the conflict began, while, according to the Israeli military, Palestinian fighters fired more than 3,000 rockets into Israel, some 550 of which were intercepted by the Iron Dome system.

The Israeli military says three Israeli civilians and 64 soldiers have been killed in the conflict, but the Palestinian resistance movement Hamas puts the fatalities at more than 150.

On Monday, Israel announced it would stop its operations in Gaza for seven hours, starting from 0700GMT to 1400 GMT Monday amid the increasing global condemnation of Tel Aviv’s deadly attacks on Palestinians.