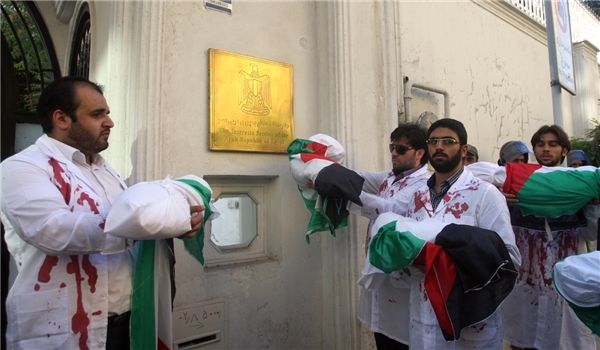 TEHRAN (FNA)- Iranian students are due to hold rallies in front of the Egyptian interest section and the Jordanian embassy in Tehran on Monday to protest at the two Muslim countries’ negligence and indifference to the numerous international demands made for opening their borders to humanitarian aid cargoes for the Palestinians.

The organizers of the rallies announced that the Iranian students have written letters to a number of Islamic embassies in Tehran to protest at their silence on the Gazans’ massacre by Israel and their non-cooperation in sending humanitarian aids to the Palestinians who are in urgent need of food stuff and medicine.

The students are due to gather in front of the Egyptian interest section and the Jordanian embassy on Monday in the presence of a number of political figures and senior parliament members.

Last night, Tehran University Professors, staff and students issued a statement to blast the UN secretary-general for his inaction vis-a-vis Israel’s ongoing atrocities and massacre of the Palestinians in Gaza, and urge Ban Ki-moon to comply with his duty as the head of the world body to stop Tel Aviv’s ongoing bloodshed in the besieged enclave.

“It has now been nearly four weeks that the small blockaded and helpless land of Gaza is being destroyed through the vicious and inhumane forces of an occupying regime,” the academics, personnel and students of Tehran University said in a statement issued Saturday night.

“Mr. Ban Ki-moon, due to your important responsibility, you are held accountable to end these events.”

“You must bear responsibility for the position that you occupy. Nations find your actions to be unacceptable. It is essential that this genocide be stopped in any way possible and the captive Palestinian nation be returned its principal rights. We expect action. We demand action. What, sir, are you prepared to do,” the statement asked in conclusion.

The Palestinian death toll in Israel’s onslaught on Gaza has now reached nearly 1,749, with over 10,000 people injured. Most of the casualties have been civilians, including a large number of women and children.

Millions of Iranians in the International Quds Day rallies last Friday condemned Israeli crimes against the oppressed Palestinian nation, specially in Gaza, and the silence shown by the international bodies and the western states over the Zionists’ massacre of the Gazans.