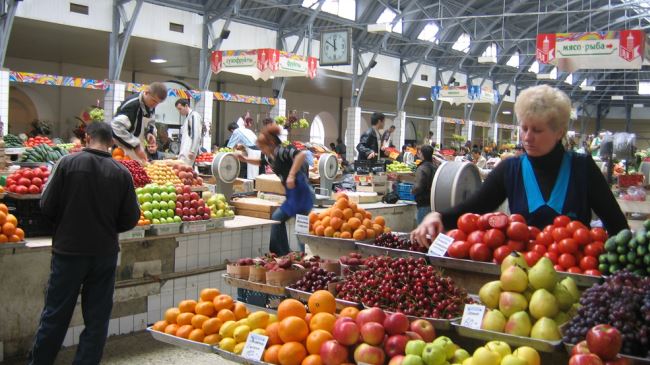 The file photo shows a market in Moscow

Russia has blocked Ukrainian food products from its markets due to health problems.

Moscow on Friday blocked most grain imports from Ukraine; it also banned dairy imports from the country after discovering contaminants in them.

According to some reports, Russian officials are also planning to block European fruit and vegetable as well as US poultry due to pests and harmful levels of antibiotics.

Russia gets about a quarter of its produce from the European Union countries. Russian officials believe the banned products can be replaced with imports from other countries such as Turkey, China, Iran and Argentina.

Economic experts warned last week that EU sanctions against Russia over the crisis in Ukraine could hit its own struggling economy. They said the sanctions could cut some 40 billion euros from the bloc’s annual economic output and the figure could rise to 50 billion in 2015.

The International Monetary Fund (IMF) also warned that the European economies, which have active and direct trade links with Russia, will be worst hit by the measures.

The EU along with the United States have been accusing Moscow of playing a role in the crisis in eastern Ukraine, which broke out when Kiev launched military operations to silence pro-Russia protests in April.

Threats of sanctions intensified further after Malaysian Flight MH17, which had been heading from the Dutch capital of Amsterdam to Kuala Lumpur, was reportedly shot down over Ukraine’s volatile Donetsk region on July 17.

Western powers accuse pro-Russia forces of downing the civilian airliner. The pro-Russians deny any involvement in the tragedy.