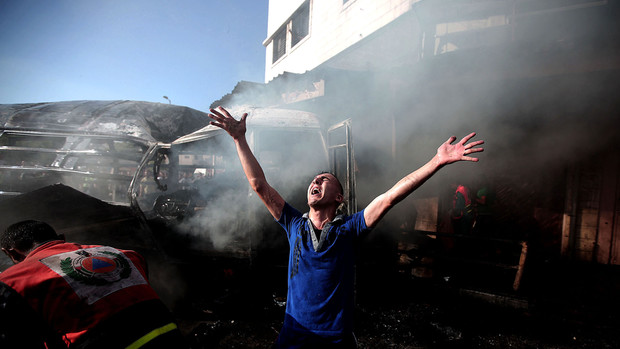 Photographer: Mustafa Hassona/Anadolu Agency/Getty Images
A Palestinian man reacts next the wreckage of a minibus after it was hit by an Israeli strike in Gaza City, on July 31, 2014.

President Barack Obama urged Palestinian militants in Gaza to release a captured Israeli soldier, and said the U.S. will work to restore a truce that collapsed within hours.

“It’s going to be very hard to put a cease-fire back together again if Israelis and the international community can’t feel confident that Hamas will follow through,” Obama said yesterday at the White House.

Israel and Hamas, the Islamist group that rules Gaza, each accused the other of shattering the cease-fire brokered by the U.S. and United Nations that was supposed to enter force early yesterday and last for three days.

Obama and UN chief Ban Ki-moon, who also urged the captive’s release, both blamed Hamas for the resumption of violence. Ashraf al-Qedra, a Gaza Health Ministry spokesman, told reporters that the first violation came when Israeli tanks shelled Rafah in southern Gaza. He said 104 Palestinians were killed yesterday in intensive bombing of the coastal strip.

The proposed truce was the latest effort to halt 25 days of fighting and initiate talks on a more lasting settlement. Israel has been bombarding Gaza by air, sea and land, while militants based there have fired thousands of rockets at the Jewish state and mounted ground attacks via tunnels. The conflict has killed more than 1,600 Palestinians, most of them civilians, while more than 60 Israeli soldiers and three civilians have died.

Israel’s Prime Minister Benjamin Netanyahu said Hamas broke the accord with an attack on Israeli forces about an hour after the truce began at 8 a.m. local time.

Israel named the missing soldier as Hadar Goldin, 23. Commenting on his suspected capture, Israeli army spokesman Lt. Col. Peter Lerner said troops destroying a tunnel were attacked by militants. It “looks like” a soldier was taken back through the tunnel, he said. Israel said two other soldiers were killed in the clash. Netanyahu yesterday vowed to continue destroying the network of Hamas tunnels, even under a truce.

The father, Simcha Goldin, a professor of Judaic Studies at Tel Aviv University, told reporters outside his house in the city that “we trust that the army won’t stop in any way until it turns over every stone in the Gaza Strip and brings Hadar back safe and sound.”

Secretary of State John Kerry, who helped arrange the accord, condemned the killing of the Israeli soldiers and the suspected abduction of another as an “outrageous violation” of the truce.

Israel says Hamas, which is considered a terrorist organization by the U.S., European Union and Israel, should be disarmed under any agreement, while Hamas demands the lifting of an Israeli-Egyptian embargo on the territory.

The start of the cease-fire was due to be followed by negotiations in Cairo, with delegations from Israel, Hamas, the Palestinian Authority, Egypt and the U.S. all involved. Egypt’s Foreign Ministry said yesterday that the invitation still stands, according to the official Middle East News Agency, though there was no indication that any talks would be held.

Hamas allies Turkey and Qatar also were involved in the talks that led up to the truce announcement. Kerry has been in touch with both countries since news broke of the captured Israeli soldier, according to a U.S. official who asked not to be identified because of the sensitivity of talks.

Israel’s Channel 2 cited a Hamas official it didn’t name as saying the group had told Egypt it’s willing to enter into a new cease-fire and would wait for an Israeli response.

The military wing of Hamas, the Al-Qassam Brigades, said by e-mail that Israeli ground forces entered Rafah at 2 a.m. yesterday, and a gunfight broke out at about 7 a.m. that raged until after the start of the cease-fire. Al-Qassam has no information about the missing Israeli soldier, his whereabouts or the circumstances of his disappearance, it said in a statement posted on its website.

In some parts of Gaza, the brief truce had brought a measure of calm, as people began to leave their homes to buy food, bury their dead and visit the wounded in the hospitals.

As the cease-fire frayed, Israel’s army said eight rockets and mortars were fired from Gaza, seven of which fell in open areas while one was intercepted. Protests also broke out yesterday in theWest Bank, the territory ruled by Hamas’s rival, Fatah, and two people have been killed in clashes with the Israeli military, the Palestinian news agency Wafa reported.