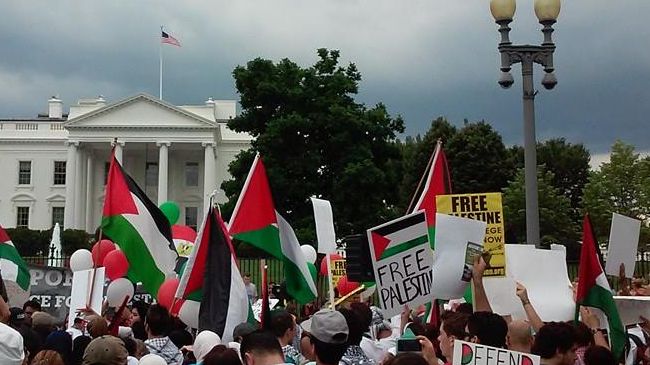 Thousands of people took to the streets in the United States to support the Palestinian people who are under continued attacks by Israel in the Gaza Strip.

About 10,000 people gathered in Washington DC on Saturday to condemn Israel’s atrocities against the people in Gaza.

The demonstrators angry with the ongoing bloodshed in the region called for an end to the Gaza conflict and chanted “Free, free Palestine,” and “Free Gaza.”

The rally turned violent after a police officer arrested one of the protesters. People reacted by shouting “shame on you.”

In Los Angeles, activists also rallied in solidarity with the people of Palestine. The protesters marched on the Israeli consulate and shut down traffic for hours to condemn the bloodshed in Gaza.

On Friday, thousands of peace activists held a demonstration in New York City to protest against Israel’s crimes in Gaza and the biased coverage they receive in the US media.

More than 1,800 people have been killed and over 9,300 others have been injured as Israel has been engaged in a relentless onslaught on the Gaza Strip for 27 days.

A dozen people were killed and 30 others injured in the latest Israeli attack. A UN school sheltering displaced Palestinians in the southern town of Rafah was targeted.

Hamas’s spokesman Sami Abu Zuhri has called on the United Nations and other international bodies to break their silence on Israeli crimes.

He added that Israel deceived the whole world by claiming the capture of a soldier to provide a pretext to break the ceasefire and attack innocent Palestinians.

Chomsky said that Israel is much worse than the former apartheid regime in South Africa.

“Hospitals have been attacked repeatedly. Each one is a war crime. In fact, for Israel to fire one bullet across the border is also a crime. Trials for war crimes only apply to the defeated. Within the occupied territory, Israel’s polices are much worse than apartheid,” he said.