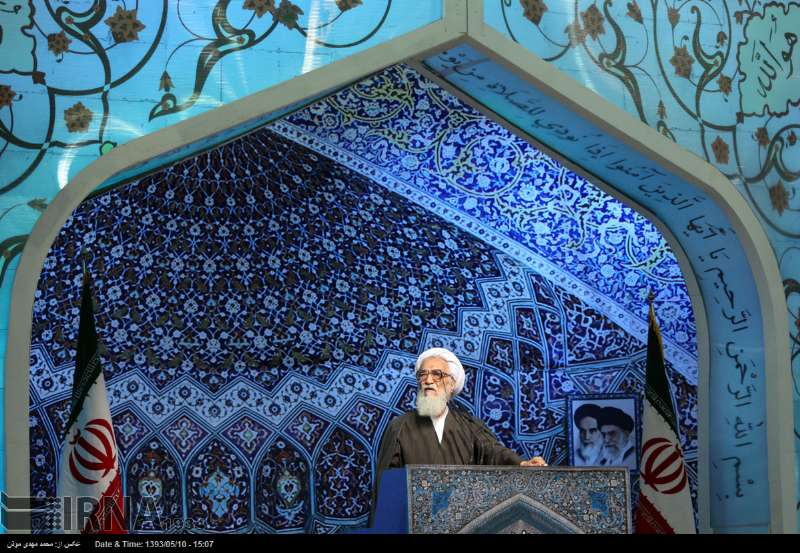 Iran’s regime used the Tehran Friday Prayers to pursue its rhetorical offensive against Israel over the Gaza War, declaring that global revenge awaits the Israelis for their military operations.

THe Friday Prayers leader, Ayatollah Mohammad Ali Movahedi Kermani (pictured), issued the warning, “Israel should come to realize that humanity’s tolerance is limited and if this tolerance becomes overwhelmed it is then that the occupying regime should wish for its own demise.”

Movahedi Kermani said news of “the crimes of this brutal regime will gradually reach the people of the world”, so the international community will “begin to know this wicked element” and respond to it.

The sermon adds to an increasingly tough line by Tehran over the 25-day war. The Supreme Leader, supported by his top political and military officials, has said that Palestinians in the West Bank as well as Gaza should be armed to resist Israel. Last week, President Rouhani finally broke his muted position, calling both Israel and the jihadist Islamic State “tumors” that threatened the world.

Economy Minister: Government Up to $100 Billion in Debt

Economy Minister Ali Tayebnia has said that the Government is up to 250 trillion Toman (about $100 billion) in debt, although the exact amount is not clear.

Tayebnia told Fars News that the debt includes 30 to 40 trillion Toman to contractors, 67 trillion to banks, and 70 Toman to the National Pension Fund.

The Rouhani Government has criticized the administration of predecessor Mahmoud Ahmadinejad for widespread mismanagement and loss of revenues.

Tayebnia reinforced the message, saying that the lack of debt repayment led to severe strain on industries and banks and that Ahmadinejad had seriously weakened the Iranian currency.