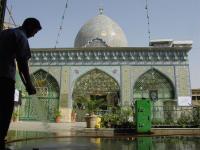 The head of Tehran City Council says the money budgeted for building new mosques in the capital should be used to restore the city’s historical mosques.

Ahmad Masjed Jamei told reporters on Friday July 35, following a week-long tour of Tehran’s historic buildings, that the budget for the four-year plan to build 400 new mosques would be better used to restore the city’s historical and heritage buildings.

He said many old mosques have long been in need of restoration funds, and in some extreme instances such as the historical Haj Rajabali Mosque, scaffolding for restoration services was set up 50 years ago and that scaffolding is itself now “becoming a historical installation.”

The head of Tehran City Council called for the establishment of a task force to tackle the restoration of these historical buildings all across the capital.