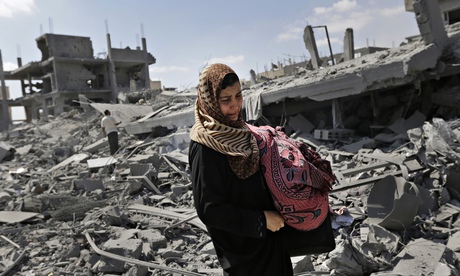 A Palestinian woman carries her belongings past the rubble of houses destroyed by Israeli strikes in Beit Hanoun. Photograph: Lefteris Pitarakis/AP

In the dangerous streets around the hospital in Beit Hanoun, the buildings were, by and large, still standing on Friday afternoon. By Saturday morning, after a day of intense Israeli bombing and shellfire, the hospital in the northern Gaza town was standing in a sea of rubble, its walls pockmarked with gunfire and torn by shrapnel.

The skyline, until so recently regular and neat, had been transformed into something torn and ragged. The tops of a pair of minarets had been blown off, and the graves in a cemetery smashed to pieces. Houses, offices, apartment blocks and shops were collapsed or collapsing.

The bombs that hit these streets in the time between the Observer‘s two visits were visible, and sometimes audible, across the city as huge explosions sent up eruptions of grey smoke into the sky.