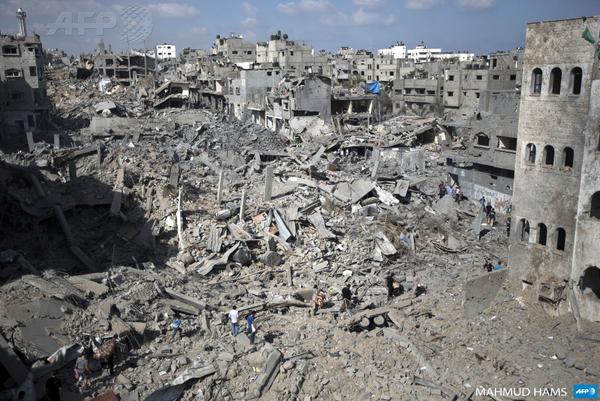 Eight Palestinians were killed in an Israeli air strike on the southern Gaza town of Khan Yunis Saturday, four of them children, emergency services said, according to Agence France-Presse.

About 20 people were wounded in the strike, hours before a ceasefire was due to take effect.

The deaths brought the overall toll of Palestinian dead to 879.

Meanwhile, the Israel Defense Forces (IDF) called on Palestinians who were asked to vacate their homes to “refrain from returning”

“Gaza civilians who have been requested to vacate from their residence are to refrain from returning,” the IDF spokesperson’s said in a statement.

“The IDF shall respond if terrorists choose to exploit this time to attack IDF personnel or fire at Israeli civilians,” the statement read.

“During this time, the Operational activities to locate and neutralize tunnels in the Gaza Strip will continue,” it added.

On Friday, two Israeli soldiers were reportedly killed in Gaza fighting, taking the total number of military deaths since the start of ground operations there to 37.

The incident happened shortly after Israeli Prime Minister Benjamin Netanyahu told the U.S. Secretary of State John Kerry that Israel agrees to a 12-hour Gaza ceasefire starting at 7am Israeli time (4:00am GMT) on Saturday.

The U.S., Britain, Germany, Italy, the European Union, Turkey and Qatar will attend talks on Saturday in Paris aimed at converging “all efforts” for a ceasefire in Gaza.