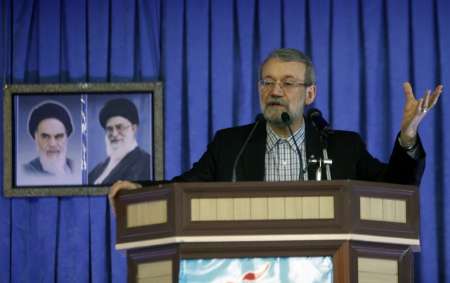 Tehran, July 25, IRNA – Speaker of Majlis (Parliament) Ali Larijani strongly condemned crimes of occupying regime of Israel in Gaza and said savagery and villainy of the regime are even worse this time.

Addressing the people taking part in Quds Day rallies in Karaj near Tehran, Larijani said Prime Minister of the Zionist regime impudently announces that they will bombard schools and hospitals in Gaza which is the peak of villainy of the Zionists.

Referring to 18 days of Israeli attacks against defenseless people of Gaza, Larijani said although usurpers of Quds are killing women and children in Gaza, weapons of resistance have created troubles for them.

Millions of Iranians rallied in the streets of cities, towns and villages of Iran on Friday to condemn the barbaric actions of Israel in Gaza. Today is the last Friday of the holy month of Ramazan which has been called Quds Day by the founder of the Islamic Revolution Imam Khomeini.