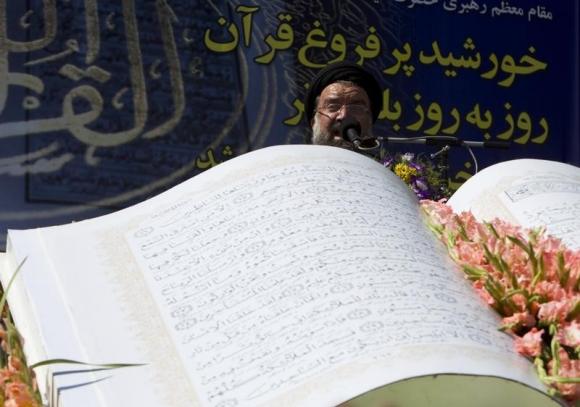 Ayatollah Ahmad Khatami gives a speech in front of a large model of the Koran during a demonstration after Friday prayers in Tehran September 17, 2010.
CREDIT: REUTERS/CAREN FIROUZ

(Reuters) – Iranians took part in huge rallies across the country on Friday to show solidarity with Palestinians, urging them to keep up their struggle despite the Israeli assault on Gaza, Iranian state television reported.

Footage showed hundreds of thousands of people demonstrating in the capital Tehran. They chanted “Death to Israel” and “Death to America” and carried pictures of Palestinian children killed in Gaza.

State media said “millions” of people joined the rallies nationwide, which were called to mark Iran’s annual day of solidarity with Palestinians.

The Iranian government has condemned Israel’s offensive against Gaza, which has killed more than 800 people, most of them civilians. It has also expressed support for the Islamist group Hamas, which rules Gaza.

They carried banners reading “Defending Gaza and Palestine is our religious duty”.

“We are ready to support our Palestinian brothers and sisters in Gaza. We are ready to sacrifice our blood for them,” a man in his 40s told state television in the southern city of Zahedan.

Ayatollah Ahmad Khatami told worshippers at Friday prayers at Tehran University that Muslims around the world should unite against Israel.

“Pressure your governments to boycott this regime (Israel). All Muslims should join hands against this regime,” he said.

Iran regards Palestine as comprising all of the Jewish state – which it does not recognize – as well as the West Bank and Gaza.

Israel and the United States have long accused Iran of supplying arms to Hamas, considered by Washington and the European Union as a terrorist group. Tehran says it gives moral, financial and humanitarian support.

However, Iran’s parliament speaker Ali Larijani said on Thursday that Tehran had provided Hamas with “the technology to manufacture arms”.

“There was a time that Hamas needed the know-how … We gave it to them and today the fighters in Gaza are capable of meeting their needs,” Larijani told Iran’s Arabic language al-Alam TV.