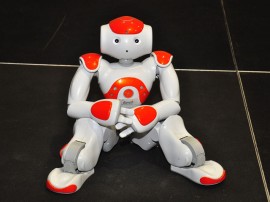 They defeated Brazil and China but drew with Germany to succeed to the next step.

Two teams of six robots each play in the Small Size robot soccer game. The robot should fit within an 180mm diameter circle and should be no higher than 15 cm. The robots play soccer with an orange golf ball on a green carpeted field that is 6.05 m long by 4.05 m wide.

In Humanoid League, Qazvin Islamic Azad University teams defeated Australia, France, Indonesia and china to qualify for the next round.

In the Humanoid League, autonomous robots with a human-like body plan and senses play. Unlike humanoid robots outside the Humanoid League the task of perception and modeling the world is not simplified by using non-human like range sensors. In addition to soccer competitions technical challenges also take place. Dynamic walking, running, and kicking the ball while maintaining balance, visual perception of the ball, other players, and the field, self-localization and team play are among the many research issues investigated in the Humanoid League.

Parand Islamic Azad University and Amir Kabir University of Technology teams outsmarted Brazilian and American teams to secure their place in the next round.

Qazvin Islamic Azad University team trounced rivals in RoboCup@Home to go up as one of eight top teams.

Its rescuer robots took part in three rounds of games with Germany and Austria in the path to the next round.

Disaster rescue is one of the most serious social issues which involve very large numbers of heterogeneous agents in the hostile environment. The RoboCupRescue project seeks to promote research and development in this socially significant domain at various levels involving multi-agent team work coordination, physical robotic agents for search and rescue, information infrastructures, personal digital assistants, a standard simulator and decision support systems, evaluation benchmarks for rescue strategies and robotic systems that are all integrated into a comprehensive systems in future.

The event kicked off on Saturday with 47 countries participating in the competition. Main competitions will be on July 21-24 and the contestants will attend symposium on July 25.

RoboCup 2014 is organized worldwide by RoboCup Federation, institution analogous to FIFA in the robots soccer universe. More than 2500 contestants from 47 countries and more than 60,000 visitors are expected to attend the event.