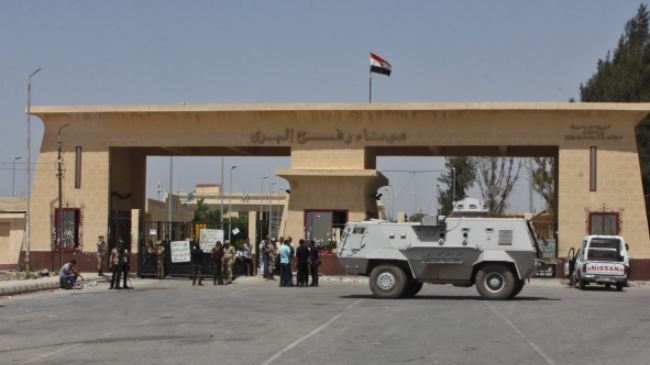 Egyptian border policemen are seen at the Rafah border crossing between Egypt and the besieged Gaza Strip. (File photo)

Parliament speakers of Iran, Qatar and Turkey have called on Egypt to reopen Rafah border crossing with the Gaza Strip amid the Israeli regime’s escalating military offensive against the blockaded coastal enclave.

In separate meetings with Iran’s Majlis Speaker Ali Larijani on Tuesday afternoon, Turkish and Qatari parliament speakers, Cemil Çiçek and Mohamed bin Mubarak al-Kholaifi, respectively, called for the reopening of the border crossing to facilitate the delivery of aid to Gaza and the transfer of those injured to hospitals in other countries.

The officials made the remarks after a one-day meeting of the Parliamentary Union of Organization of the Islamic Cooperation Member States’ (PUIC) Presidential Troika ended in the Iranian capital, Tehran, on Tuesday.

The Turkish parliament speaker emphasized that the final statement of the PUIC Troika meeting will definitely play an effective role in boosting support for the Gazans.

All Muslim countries should feel responsible for meeting the medical and essential needs of the people of Gaza and take practical steps in this regard, he added.

The Qatari official also described the situation in Gaza as deplorable, adding that the silence of the Western world and some of the Islamic states over the issue is shameful.

Meanwhile, Larijani expressed the Islamic Republic’s support for the Gazans and condemned the Zionist regime’s crimes.

“Islamic countries should make efforts at the current juncture to satisfy the essential needs of the people of Gaza such as medicines, [and also provide them with] other [kinds of] humanitarian aid and treatment for those wounded in the Zionists’ savage attacks,” the Iranian official pointed out.

Israel unleashed its offensive on the Gaza Strip on July 8. Over the past 16 days, Israeli warplanes have been hitting numerous sites in the besieged Gaza Strip, demolishing houses and burying families in the rubble. Israel also began a ground offensive against the impoverished enclave on July 17.

At least 655 Palestinians, mostly women and children, have been killed and more than 4,200 others injured in Israel’s latest offensive.