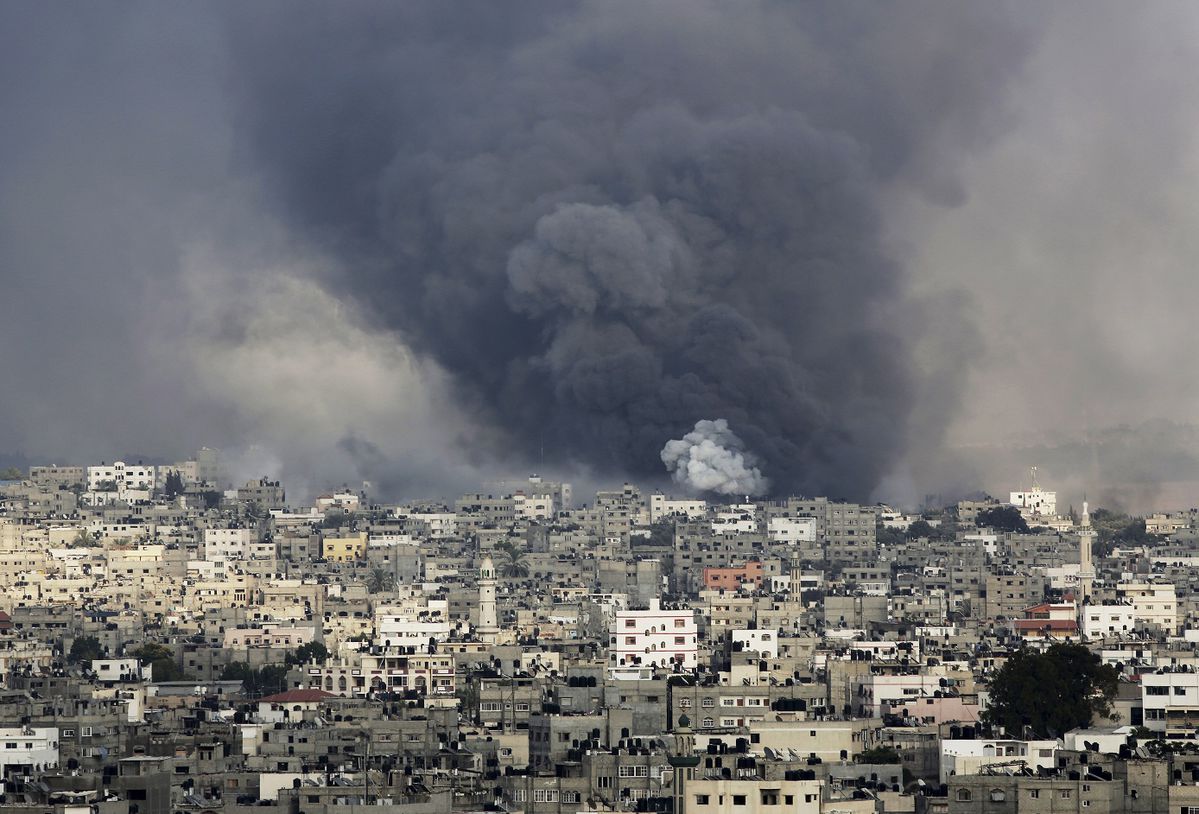 (Reuters) – Gaza fighting raged on Wednesday, displacing thousands more Palestinians in the battered territory as U.S. Secretary of State John Kerry said indirect truce talks between Israel and Hamas had made some progress.

While pressing a 15-day-old offensive, Israel scrambled to contain economic damage from a halt of flights to Tel Aviv’s main airport by U.S. and European airlines spooked by the long-range rocket salvoes of Hamas and other Gaza Strip guerrillas.

Adding to pressure on Israel, U.N. High Commissioner for Human Rights Navi Pillay said there was “a strong possibility” that it was committing war crimes in Gaza, where 668 Palestinians, mostly civilians, have died in the fighting.

Israel denied the suggestion, stepping up the war of words and accusing Hamas of using fellow Gazans as human shields.

Kerry met Palestinian President Mahmoud Abbas and was due to see Israeli Prime Minister Benjamin Netanyahu before returning to Egypt, which shares a border with Gaza and has mediated with Islamist Hamas.

“We have certainly made some steps forward. There is still work to be done,” said Kerry, on one of his most intensive regional visits since the peace negotiations he had brokered between Netanyahu and Abbas broke down in April.

“We are doing this for one simple reason. The people in the Palestinian territories, the people in Israel, are all living under the threat or reality of immediate violence. And this need to end for everybody.”

Kerry has been working through Abbas, Egypt and other regional proxies as the United States, like Israel, shuns Hamas as a terrorist group. Hamas brushed off the U.S. diplomat’s appeal, saying it would not hold fire without making gains.

“Our interest and that of our people is that no agreement should be made before the conditions of factions of resistance are met,” Hamas spokesman Sami Abu Zuhri said.

Israel launched its offensive on July 8 to halt rocket salvoes by Hamas and its allies, which have struggled under an Israeli-Egyptian economic blockade on Gaza and angered by a crackdown on their supporters in the nearby occupied West Bank.

After aerial and naval bombardment failed to quell the outgunned guerrillas, Israel poured ground forces into the Gaza Strip last Thursday, looking to knock out Hamas’s rocket stores and destroy a vast, underground network of tunnels.

“We are meeting resistance around the tunnels … they are constantly trying to attack us around and in the tunnels. That is the trend,” Israeli military spokesman Lieutenant-Colonel Peter Lerner said on Wednesday.

MILITARY LOSSES RISEHamas and a smaller Gaza faction, Islamic Jihad, said they killed several Israeli soldiers in two separate ambushes on Wednesday. Israel had no immediate comment on those claims.

Some 29 troops have been confirmed killed so far in the conflagration. Three civilians have died in rocket attacks out of Gaza, including a foreign laborer hit on Wednesday.

The military says one of its soldiers is also missing and believes he might be dead. Hamas says it has captured him, but has not released a picture of him in their hands.

Already hurt by mass tourist cancellations, Israel faced increased economic pressure after the U.S. Federal Aviation Administration (FAA) took the rare step on Tuesday of banning flights to Tel Aviv for at least 24 hours. Many other foreign carriers, on heightened alert after a Malaysian airliner was shot down over a combat zone in Ukraine last week, followed suit. Israeli carriers continued to operate.

The FAA action represented a public relations coup for Hamas, which is anxious to dent Israel’s global image. However, the Tel Aviv stock exchange and Shekel were flat, with traders showing little immediate concern about the flight stoppages.

An Israeli official said Netanyahu had asked Kerry to help restore the U.S. flights. A U.S. official said the Obama administration would not “overrule the FAA” on a security precaution but noted the ban would be reviewed after 24 hours.

However, U.S. carrier Delta Air Lines (DAL.N) said it would extend its suspension of flights on Wednesday, as did Germany’s Lufthansa and Air Berlin as Polish airline LOT.

Clouds of black smoke hung over Gaza, some 65-km (40 miles) south of Ben Gurion, with the regular thud of artillery and tank shells filling the air.

Palestinian medics said two worshippers were killed and 30 wounded in an attack on a mosque in the heart of the densely populated Zeitoun neighborhood in eastern Gaza City.

In southern Abassan and Khuzaa villages, residents said they were besieged by Israeli snipers who wounded two Palestinians as they tried to emerge from hiding with white flags in hand. Israeli tanks fired shells near ambulances, discouraging their approach to recover casualties, witnesses said.

In a move that could effectively turn Abbas into the main Palestinian point person for any Gaza truce, his umbrella Palestine Liberation Organization (PLO) on Wednesday formally supported core conditions set by the Hamas-led fighters.

These demands include the release of hundreds of Hamas supporters recently arrested in the nearby West Bank and an end to the Egyptian-Israeli blockade of Gaza, which has stymied the economy and made it near impossible for anyone to travel abroad.

Egypt has tried to get both sides to hold fire and then negotiate terms for protracted calm in Gaza, which has been rocked by regular bouts of violence since Israel unilaterally pulled out of the territory in 2005.

Hamas, which refuses to recognize Israel’s right to exist, balked at Cairo’s original, barebones offer. The dispute was further complicated by distrust between Egypt under President Abdel Fattah al-Sisi and Hamas.

Egyptian sources said a unified Palestinian position could help achieve a deal. Unlike Hamas, Abbas and his Western-backed PLO have pursued peacemaking with Israel for two decades.

Gaza’s Health Ministry said 49 Palestinians were killed on Wednesday, many of them in the southern town of Khan Younis — one of the focal points of Israel’s recent assault.

In the far north, residents continued to flee Beit Hanoun as Israeli tanks thrust deeper into the border town and destroyed nearby orchards in their search for hidden Hamas tunnels.

“Columns of people are heading west of Beit Hanoun, looking for a safe shelter. This is not war, this is annihilation,” said 17-year-old Hamed Ayman.

“I once dreamt of becoming a doctor. Today I am homeless. They should watch out for what I could become next.”

Gaza officials said that so far in the 16-day conflict, 475 houses had been totally destroyed by Israeli fire and 2,644 partially damaged. Some 46 schools, 56 mosques and seven hospitals had also suffered varying degrees of destruction.

“There seems to be a strong possibility that international humanitarian law has been violated, in a manner that could amount to war crimes,” the U.N.’s Pillay told an emergency session at the UN Human Rights Council in Geneva.

She also condemned indiscriminate, militant rocket and mortar attacks out of Gaza.

“Israel is acting according to international law. It is acting against terrorism. It is regrettable civilians are killed, but when we call on them to vacate and Hamas calls on them to stay, then that is what happens,” she told Israel Radio.