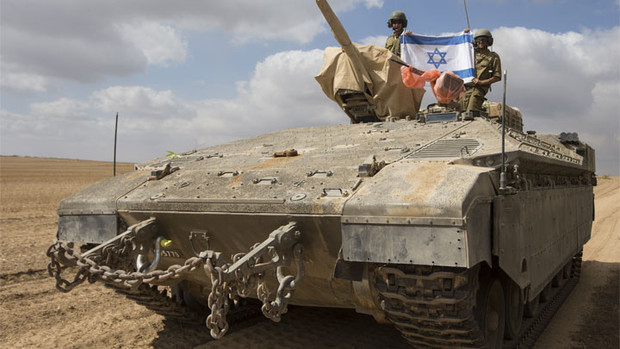 July 22 (Bloomberg) — Bloomberg’s Elliott Gotkine reports on support in Israel for the conflict in the Gaza Strip as casualties mount on both sides. He speaks on “Bloomberg Surveillance.”

U.S. Secretary of State John Kerry put the onus on the Gaza Strip’s Hamas rulers to halt two weeks of fighting with Israel that has killed more than 600 people, the overwhelming majority of them Palestinians.

Kerry, who arrived in Cairo yesterday, said he traveled to the region to support an Egyptian cease-fire initiative that foundered last week after Hamas rejected it. “Only Hamas now needs to make the decision to spare innocent civilians from this violence,” Kerry told reporters in a joint press appearance with United Nations Secretary-General Ban Ki-moon, who is also in the Middle East pressing for a truce.

Kerry said talks must also address “underlying issues” for any cease-fire to prove durable. Hamas says it wasn’t consulted on the proposal, which Israel accepted, and has demanded that any accord lift economic curbs on Gaza.

Israel and Gaza militants have clashed frequently since Israel ended its 38-year occupation of the territory in 2005. Previous truces haven’t resolved fundamental issues including the arsenals militants have amassed and the cross-border tunnels they’ve built to attack Israel, and the Israeli blockade on Gaza. The embargo, along with Egypt’s sealing of its border with Gaza, has battered the enclave’s economy and confined 1.8 million Palestinians to a 140-square-mile (363-square-kilometer) patch of land.

Israeli markets have been largely unaffected by the violence that has killed more than 570 Palestinians and at least 29 Israelis since weeks of rocket fire into Israel and air strikes on Gaza escalated on July 8. The shekel has appreciated 0.2 percent against the dollar since July 8 while the benchmark TA-25 index rose 1 percent in the period.

A majority of the Gaza dead are women and children, Palestinian health officials said. Israel says Hamas uses civilians, including children, as human shields. The number of Gazans seeking shelter from the fighting with the UN Relief and Works Agency has exceeded 100,000, the agency said in a Twitter posting.

At least 27 Israeli soldiers have been killed since ground troops entered the Gaza Strip last week, the military said, more than double the toll during Israel’s last incursion in 2009. Today it said it has identified the remains of six of seven soldiers who were in an armored car that was badly damaged in battle earlier this week. Efforts to identify the seventh soldier continue, the military said in a statement. It declined to comment when asked whether that soldier was the serviceman Hamas militants claim to have captured. The militants didn’t say whether the soldier they say they seized was dead or alive, Al-Jazeera reported.

In addition to the combat casualties, two Israeli civilians have been killed by rockets since early July.

The relatively high Israeli military toll “reflects the intensity of the type of combat we’re facing,” Israeli military spokesman Lieutenant-Colonel Peter Lerner said by phone today. “Hamas is trying to save, and operate and maintain the tunnels, and that is where we’re finding most of the friction.” Israel killed 10 infiltrators yesterday in a battle that also claimed the lives of four soldiers.

Fighting was heavy today in the Shuja’iya neighborhood of Gaza City where Israeli soldiers were finding more weapons caches and tunnels, Lerner said. Destroying tunnels is the stated aim of the ground war Israel began on July 17 after failing to demolish them in air strikes. The aerial bombardment has also targeted rocket operations; the military says 2,060 rockets have been fired at Israel since July 8.

Shortly before Kerry arrived in Cairo on his truce mission, Hamas political leader Ismail Haniyehsaid his group wouldn’t back down without pledges the Israeli blockade will be lifted. He also demanded that hundreds of Palestinians arrested in Israel’s recent sweep of the West Bank be released.

“We will never give up and will go for this war to the end until our demands are met,” Haniyeh said in a televised speech yesterday.

Hamas officials are ready to go to Cairo if invited by Egyptians to discuss the proposed truce, though they can’t accept it in its current form “after all the huge sacrifices Palestinians have made in the past two weeks,” Mohammad Nazzal, one of the group’s leaders, told Al-Jazeera television.

Egypt’s Foreign Minister Sameh Shoukry said late yesterday that the proposal his government made last week won’t be amended, and offers the prospect of all Gaza’s borders being opened. The plan didn’t include details on how that would be achieved.

Restrictions Israel imposed in 2006 after militants captured a soldier expanded into a full-blown naval and land blockade in 2007 following Hamas’s violent takeover of Gaza. The land blockade was eased in 2010 without allowing for large-scale exports of goods from Gaza or ending limits on the entry of construction materials needed for industry. Israel, pointing at concrete-lined infiltration tunnels by way of example, says it restricts building materials militants could use to attack Israel.

Israel has called for the demilitarization of Gaza, and says it’s campaign is making progress in diminishing the militants’ rocket capabilities and crippling the network of tunnels they built.