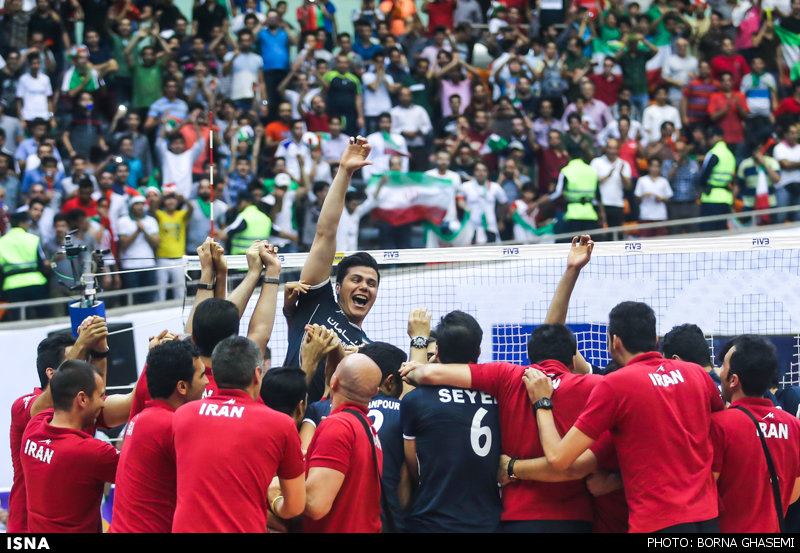 TEHRAN (FNA)- Iran thrashed Brazil in their second match in the final round of the FIVB 2014 Men’s Volleyball World League in Italy on Friday and bought a ticket for the semifinals.

Iran had lost its first match against the Russians 3-2 on Wednesday, gaining 1 point and giving 2 to the 2013 world champions.

Brazil won Russia 3-1 on Thursday and reserved a place in the semifinals with 3 points.

Now Iran who stood at the top of their group with 4 points and Brazil with 3 points from Finals Group 1 along with Italy and USA from Finals Group 2 will prepare for the FIVB Men’s Volleball World League semifinals in Italy tomorrow.

The final round of the FIVB Men’s Volleyball World League group matches was held from July 16 to 20 in Florence, Italy, and Iran’s national volleyball team had been pooled in Group 1 with Russia and Brazil. Italy, USA and Australia were in Group 2.

Iran should now prepare for their semifinal match against the USA and Brazil should play against Italy who stood atop Group 2 after beating Austrialia and the USA.

To advance to this last episode of the 2014 World League, Iran played 12 games in the preliminary round of the International Volleyball Federation (FIVB) 2014 World League against Brazil, Italy and Poland, winning six games and losing as many. The Iranian volleyball athletes began their performance in the preliminary round on May 30 with a game versus Italy in that country’s Christie City, and played their last preliminary round game on July 5, in Poland’s Gdansk, gaining 19 points all together and standing second only to Italy who had gathered the same points, but had a better sets ratio.

Australia qualified for this round after it fought against Belgium (Pool C winners), France (Pool D winners), the Netherlands (Pool E winners) in Sydney from July 12 to 13 and collected more points than others.

Now after the end of this round in Italy, winners of each group will play with the second team of the other group (19 July), and the winners of these matches will fight for the title of volleyball world league champion (20 July).

Experts have expressed deep surprise after Iran powerfully qualified for this round. In their previous performance in the FIVB World League in 2013 – Iran’s first ever presence – under their former Head Coach Julio Velasco, they gained the 9th place, registering an effective and historical presence in the world volleyball competitions.

At the end of the preliminary round earlier this month, Iranian volleyball athlete Mohammad Moussavi Araqi was selected as the best defender of the FIVB 2014 Men’s Volleyball premier league with 96 points.

The Russian and Italian volleyballers stood second and third, respectively.

Iran’s head coach, Slobodan Kovac, started training sessions to get his men prepared for the final round of the World League after inviting three new players to the team last week.

The Iranian national team flew to Italy on Monday morning. Iran’s coach, Hossein Ma’dani, is not accompanying Kovac because of medical problems.

Brazil (9), Italy (8), Russia (3), Cuba, the Netherlands, Poland and USA (all 1) are the seven countries who have won the World League during its previous 24 editions. Serbia and France join as the only countries to have medaled in the past.