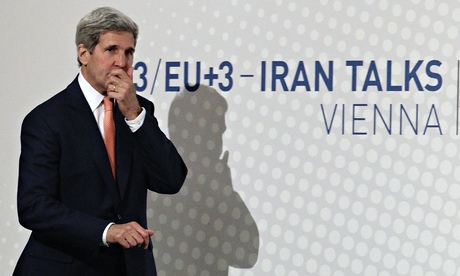 John Kerry, the US secretary of state, in Vienna where he has been negotiating with Iran about its nuclear capacity. Photograph: Heinz-Peter Bader/REUTERS

The top diplomats from the US and Iran have hailed the progress made so far at nuclear talks in Vienna but say more time may be needed to close the remaining gaps between the sides.

The US secretary of state, John Kerry, said on Tuesday that there had been tangible progress after two days of face-to-face negotiations with his Iranian counterpart, Mohammad Javad Zarif.

Zarif told reporters: “As we stand now, we have made enough headway to be able to tell our political bosses that this is a process worth continuing. This is my recommendation. I am sure secretary Kerry will make the same recommendation.”