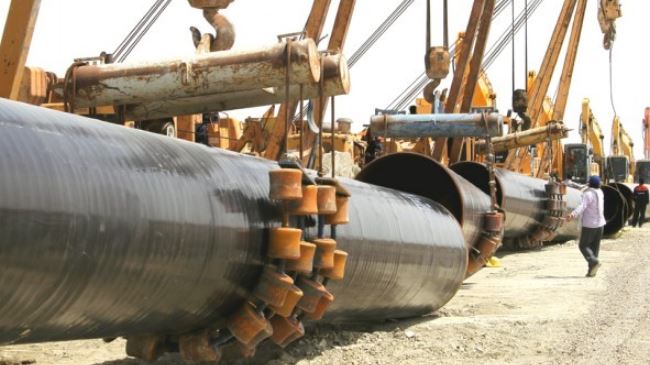 This file photo shows construction of the Iranian section of Iran-Pakistan gas pipeline.

“Iran is keen and India needs energy. The [Iran-Pakistan-India gas pipeline] project can be revived,” the Economic Times quoted an unnamed government official as saying.

The official stated that the pipeline project, stalled in 2008, could be revived amid hopes for a relief of sanctions on Iran as part of a nuclear deal between Tehran and six world powers.

The Indian government is also looking for alternatives to oil imports from Saudi Arabia and crisis-stricken Iraq.

“There has been turmoil in Syria, Iraq and other oil producing countries in the Middle East. We can’t keep all eggs in one basket,” another Indian official said, adding, “Russia is one such potential supplier. We may import natural gas from the country either in liquid form or through a pipeline.”

Iran and Pakistan signed an agreement over the construction of a gas pipeline in 1995. Later, Iran made a proposal to extend the pipeline from Pakistan into India. In February 1999, an accord between Iran and India was signed.

But due to the US pressure, India withdrew from the project in 2009.

India is among Asia’s major importers of energy, and relies on the Islamic Republic to satisfy some of its energy requirements.