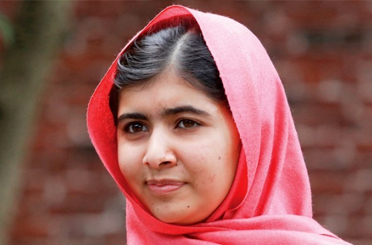 Malala Yousefzai, who survived being shot in the head by the Taliban for campaigning for girls’ education, on Sunday met parents of the more than 200 Nigerian girls kidnapped by the militant group Boko Haram from a school in the northeastern village of Chibok in April.

Boko Haram, inspired by the Taliban, say they are fighting to establish a state in Nigeria. The group, whose name means “Western education is sinful”, has killed thousands and abducted hundreds since launching an uprising in 2009.

Some of the parents broke down in tears as Malala spoke at a hotel in the capital Abuja on Sunday. “I can see those girls as my sisters and I’m going to speak up for them until they are released,” said Malala, who was due to meet President Goodluck Jonathan on Monday.

“I’m going to participate actively in the ‘Bring back our girls’ campaign, to make sure that they return safely and they continue their education.”

“I can feel the circumstances under which you are suffering,” Malala said. “It’s quite difficult for a parent to know that their daughter is in great danger. My birthday wish this year is: bring back our girls now, and alive.”

Malala has won the European Union’s prestigious human rights award and was nominated for the Nobel Peace Prize last year.