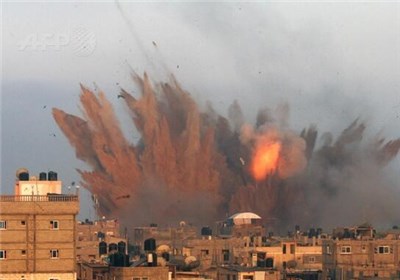 TEHRAN (Tasnim) – Israel hit the Gaza Strip with air strikes and artillery fire on the seventh day of its offensive and as diplomatic efforts to halt the bloodshed intensified.

Aircraft struck buildings in Gaza City, Deir el-Balah in the southern part of the strip, and in the northern town of Jabaliya, injuring an unspecified number of people.

There was shelling reported in Beit Lahiya, in the far north of the strip, where Israel had earlier warned residents of an impending assault.

World powers prepared to meet over the spiralling violence as the Palestinian death toll from the Israeli air campaign hit 172 with another 1,230 people wounded, the emergency services said.

Fearing for their lives, about 17,000 people have taken shelter in installations of the UN agency for Palestinian refugees, UNRWA, the agency said in a statement, AFP reported.

As the death toll rose, the Gaza-based Palestinian Center for Human Rights said most of the victims were civilians, putting their number at more than 130, among them 35 children and 26 women.

It also said Israel had destroyed 147 homes and badly damaged hundreds of others.