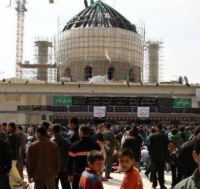 Iran’s official IRNA news agency says an Iranian pilot has been killed while fighting in Iraq.

It did not say whether the pilot died while flying sorties or fighting on the ground.

His death comes after Iran’s declarations that it will provide its western neighbor with whatever it needs to counter the Sunni militants who are laying siege to the Shi’ite-led government of Prime Minister Nuri al-Maliki.

Iranian officials insist their assistance is not in the form of troops, but rather of weapons and equipment if Iraq asks for them.