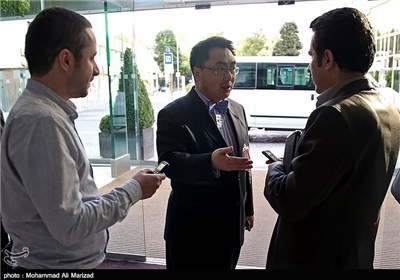 TEHRAN (Tasnim) – China’s representative in the new round of nuclear negotiations between Tehran and six world powers hailed as “very well” a trilateral meeting he held with the Iranian and Russian delegates in Vienna.

Speaking to the Tasnim News Agency on Thursday, China’s Wang Qun said he had held a trilateral meeting with Iranian Foreign Minister Mohammad Javad Zarif and Russian Deputy Foreign Minister Sergei Ryabkov earlier on Wednesday, at the start of a two-week round of nuclear negotiations between Iran and the Group 5+1 (the five permanent UN Security Council members plus Germany).

The Chinese diplomat described the meeting as “very well”.

Iran and the sextet of world powers (alternatively known as the P5+1 or E3+3) officially opened the 6th round of nuclear negotiations in the Austrian capital on Thursday.

The two sides have less than three weeks to try to agree on the future dimensions of Tehran’s nuclear program and other issues if they are to meet a self-imposed July 20 deadline for a deal.

Coordinated by the European Union, the whole negotiations are aimed at resolving the decade-long standoff on Iran’s nuclear energy program.

The current round of talks in Vienna will run until at least July 15. If required, the parties would carry on consultations to the last moment on July 20 to clinch a long-awaited agreement.