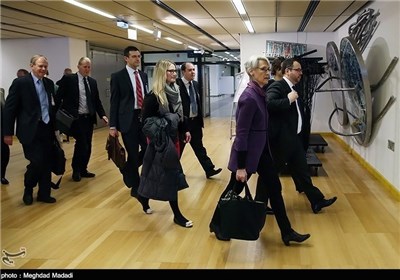 US sends 15-member delegation to Vienna for Iran N. talks

TEHRAN (Tasnim) – The US Department of State announced on Tuesday that a delegation of fifteen American diplomats will be dispatched to Austria to participate in a fresh round of talks over Iran’s nuclear program.

According to the statement, the US team will depart for Vienna on July 1 to attend the comprehensive nuclear negotiations of the Group 5+1 (the US, Russia, China, Britain, France and Germany) and the European Union with Iran.

The members of the delegation are as follows:

Wendy R. Sherman
Under Secretary of State for Political Affairs

Jacob J. Sullivan
Deputy Assistant to the President and National Security Adviser to the Vice President

Mustafa Popal
Special Assistant to the Deputy Secretary of State

Carlos DeJuana
Special Assistant to the Under Secretary of State

Iran and the Group 5+1 (also known as the P5+1 or E3+3) are scheduled to hold a fresh round of high-profile talks in Vienna on July 2 with the aim of drafting a comprehensive deal to resolve the decade-long standoff over Tehran’s peaceful nuclear energy program.

Back in November 2013, the Geneva interim agreement -officially titled the Joint Plan of Action- was signed between Iran and the sextet, based on which Iran the world powers agreed to suspend some non-essential sanctions and to impose no new nuclear-related bans in return for Tehran’s decision to suspend its 20% enrichment for a period of six months.