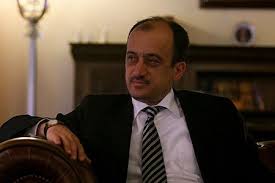 Tehran, June 28, IRNA – President Hassan Rouhani’s visit to Turkey was quite perfect and satisfactory, said the Turkish ambassador to Iran.

Speaking at a ceremony to mark Egypt’s National Day at the residence of Khaled Amareh, the head of Egypt’s Interest Section in Iran, Umit Yardim told the English-language paper ˈIran Dailyˈ, published Saturday, that both parties made good preparations for the visit and held favorable meetings on the sidelines.

He noted the importance of Rouhani’s short visit to Turkey was due to the fact that it was the first official visit of an Iranian president to Turkey in 18 years.

Yardim recalled that the last time an Iranian president visited Turkey was about 18 years ago when former president Ayatollah Akbar Hashemi Rafsanjani travelled to the country.

The Turkish ambassador said both parties could achieve their expectations during the visit.

Now it is time to follow up all the decisions and agreements which the two sides signed during the visit, he said.

“This visit also had some different characteristics. In Turkey we have a system of high level cooperation meeting in which all the cabinet ministers come together and make decisions like a small government. We had signed such an agreement with Iran during the visit of Turkish Prime Minister Recep Tayyip Erdogan to Iran in January. We organized its first meeting during the visit of President Rouhani which was a perfect organization. We will continue these exercises.”

He added that both countries also signed over 11 agreements and protocols in various fields including culture, tourism and communication during this visit which was another significant aspect.

“Now it is the duty of bureaucrats and responsible organizations to follow up the implementation of the agreements.”

He said as far as political relations are concerned, the visit was a milestone setting important cornerstone in the two countries’ relations.

“In general sense, Iran and Turkey have favorable political ties. This visit contributed to these ties a lot and reinforced them. On the other hand there are other fields of relations such as trade and economy to which such visit can contribute.

ˈWe have to work hard in this regards because when the leadership takes decision to make some progress, all the systems and structures should be actively involved and support it to realize these targets. I have complete belief and trust that mutual ties between Iran and Turkey will improve.

However, we should know that concrete results cannot appear in a 10-day period. It will take time. In reality when you make a long-term decision, to implement it and see the outcomes, you need some time.”

He added he is certainly positive and optimist about the future of the two countries relations.

“What is of utmost importance is that we have to carry the relations to higher levels. This is the main challenge faced by two countries. We say all the time that the current picture or level of relations does not reflect the two countries’ potentials.”