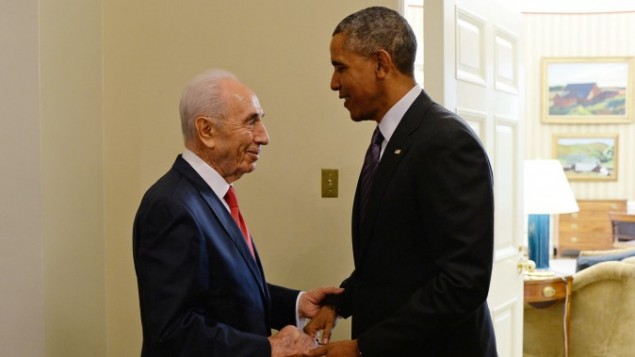 Peres: Obama can be trusted on Iran

President Shimon Peres meets with US President Barack Obama at the White House on June 25, 2014. (Photo by Kobi Gideon/GPO/FLASH90)

US President Barack Obama has worked tirelessly throughout his term in office to advance Israeli interests in the Middle East and to protect the Jewish state, from any threats posed by neighboring countries, specifically with regards to Iran, President Shimon Peres said Friday.

In an interview with Channel 10 ahead of his departure from the President’s office next month, Peres lauded Obama’s efforts to strengthen US-Israeli ties, adding that no other American president had been as receptive to Israel’s security concerns, nor has taken steps to defend the it in the international arena as much as the US president has.

“What has he not done for Israel that was requested of him to do?” Peres said of Obama.

“He vetoed UN resolutions [against Israel], did things that I do not know if anyone else would do,” said the outgoing president.

Peres went on to deflect criticism regarding Obama’s alleged hostile attitude toward Israeli officials, specifically Prime Minister Benjamin Netanyahu, and said relations between the two countries have never been better.

“All of [Israel’s] defense officials agree that, when it comes to security, there has never been such a committed relationship between Israel and the United States,” he said.

“Obama has not once said a word of condemnation to us… I look at the results, [Obama] says things that make sense,” he added.

Peres stressed that the US president had been consistent in his stance towards Israel and the Jewish people, despite not having been involved in such issues in the past. When asked whether Obama can be trusted to dismantle Iran’s nuclear weapons program, Peres responded with a short but definitive “yes.”

The president added that he had asked Obama to release Jonathan Pollard, a convicted Israeli spy who has been incarcerated in the US for nearly 30 years, and said that although the US president was attuned to the issue, the US court system would determine Pollard’s fate.

“He said that under their constitution, the Attorney-General is the one who will decide what happens.”

On Thursday, during his final trip to Washington as Israel’s president, Peres was awarded the Congressional Gold Medal, one of the highest civilian awards in the United States, for his contribution to the strengthening of relations between Israel and the US, and for his efforts to achieve peace with Israel’s neighbors.

With the award, Peres became one of only nine people to win both the congressional and presidential medals.

The visit was Peres’s last trip to the White House after some five decades’ worth of top level meetings with US presidents from John F. Kennedy onward.

Earlier in his visit, during a meeting with Obama, the US president assured that his administration would not allow Iran to develop a nuclear weapon, and will continue to remain steadfast on topics central to Israel’s security in the nuclear negotiations.

Obama told Peres that there were still gaps between the sides in the P5+1 talks with Iran, which are being held in the hopes of reaching a permanent agreement with Tehran by July 20 to curb its nuclear program. Briefing Peres on the current state of the negotiations, Obama promised that the US position would not change on Iran’s breakout potential or on key aspects of its technological development, and said that the US will not compromise on Israel’s security.

Peres will be succeeded by President-elect Reuven Rivlin next month.