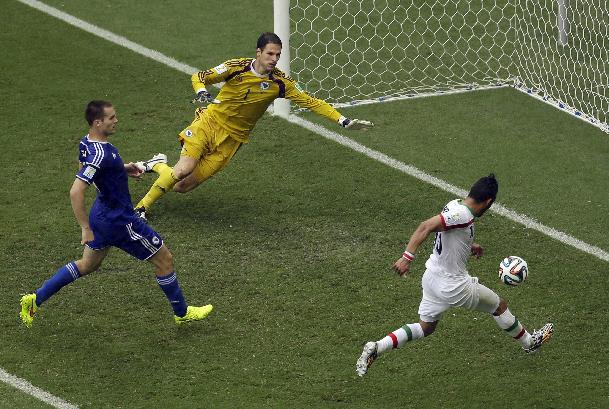 It wasn’t particularly significant, as goals go, an all-but-irrelevant shot late in a match that was long since out of hand.

But when Iran’s Reza Ghoochannejhad found the back of the net against Bosnia-Herzegovina, he put the final touches on a group mark unmatched since 1998.

All 32 teams have now scored in the World Cup, the first time that’s happened in 16 years.

The goal cut Bosnia’s lead in half, 2-1. But any hope for a miracle comeback was snuffed almost immediately, as Bosnia’s Avdija Vrsajevic scored just moments later.

The result ended Iran’s hopes of qualifying for the last 16 for the first time in their history. Coach Carlos Queiroz announced his resignation shortly after the full-time whistle.

A win would have been good enough for Team Melli to qualify after Argentina beat Nigeria 3-2, with Lionel Messi helping himself to a double. As it is, Los Albiceleste top the group with Nigeria going through as runners-up.

Overall, the Netherlands leads the World Cup with 10 goals scored, followed by Colombia with nine and France with eight.

In terms of goals per match, however, France leads with an average of four, having played only two matches to the others’ three.