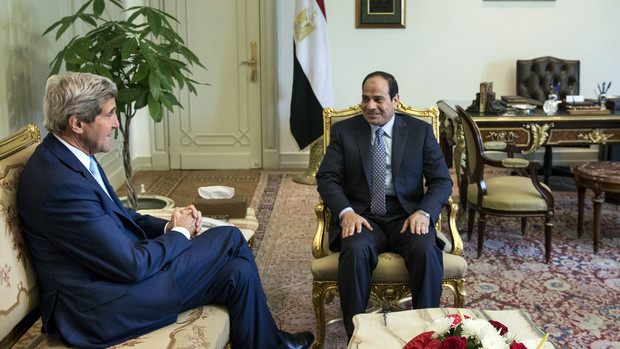 The unannounced stop is part of a week-long trip the top U.S. diplomat is making through the Middle East and Europe to discuss upheaval in the region, particularly in Iraq, where Sunni Muslim jihadists have seized territory in the north.

In Cairo, Kerry’s primary focus will be on Egypt’s security environment and the need for El-Sisi to create a more inclusive political atmosphere, according to two U.S. officials who described Kerry’s agenda. Kerry will stress the need for economic reform and underscore the way political repression slows job creation and economic recovery, according to the officials, who weren’t authorized to speak publicly.

In the months since the military ousted former President Mohamed Mursi, Egyptian authorities have jailed journalists, constrained civil society groups, restricted the public’s ability to gather and protest and cracked down on the Muslim Brotherhood, the group that backed Mursi.

A court in city of Minya yesterday ratified death sentences for 183 Mursi supporters, sentenced four to life in prison and acquitted 496, according to a faxed statement.

While the U.S. recognizes that Egypt is going through a difficult transition, one of the officials said, the Obama administration is concerned that government steps to clamp down on unrest are radicalizing parts of Egyptian society and undermining national stability.

The U.S. has responded to the crackdown by withholding military aid, releasing in 2014 only $575 million of the annual $1.3 billion in assistance it gives Egypt’s army, according to the official. Kerry will make clear that while the U.S. wants to be as supportive as possible, the official said, Egypt must take other steps before additional aid can be released.

El-Sisi would have to oversee improvements in the rule of law, additional steps toward democracy, a continued strategic relationship with the U.S., and continued commitment to the Egypt’s peace treaty with Israel, the official said.

Kerry’s visit follows up on President Barack Obama’s June 10 call to El-Sisi, in which Obama reaffirmed the U.S. commitment to continued strong bilateral ties with Egypt.

Kerry will tie Egypt’s economic concerns to the political environment, stressing the difficulty of restoring job creation, economic growth, and the tourism industry in the current context, the official said.