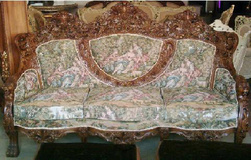 He added the country is exporting furniture-related goods mostly to Iraq, Armenia, Kazakhstan, Tajikistan and Afghanistan, and plans to hold fairs in Armenia, Erbil, Kazakhstan and Azerbaijan.

Earlier last year, Head of the Exports Commission of the Iranian Chamber of Commerce, Industries, Mines and Agriculture Asadollah Asgaroladi said that his commission plans to equalize the volume of the country’s non-oil exports and imports in the next Iranian year (started March 21).