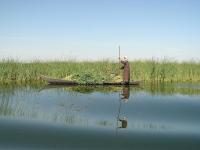 Iran points to foreign cause of dust storm problems

The report adds that 95 percent of dust storms in Iran begin outside of the country, with the other five per cent originating in the Ilam, Sistan-Baluchistan and Khuzestan provinces.

Unregulated grazing by livestock and a general lack of foresight in exploiting natural resources have also been named as factors in the growing incidence of droughts, floods, dust storms and desertification in Iran.