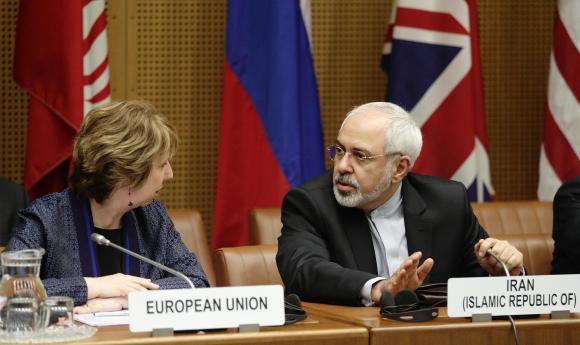 VIENNA (Reuters) – Iran is refusing to significantly cut the number of centrifuges it intends to keep to produce nuclear fuel, making it hard to imagine a compromise at this week’s talks with six powers, Western and Iranian officials said on Wednesday.

The remarks from diplomats close to the talks, who spoke on condition of anonymity, came after the initial rounds of meetings in the Austrian capital between Iran and the United States, Britain, France, China, Russia plus Germany.

They are striving for a deal that would limit Iran’s nuclear programme, subject it to stricter U.N. inspections, lift sanctions impairing Iran’s oil-based economy and remove the risk of a wider Middle East war over the dispute.

But with time running out if a precarious extension of the talks past the self-imposed July 20 deadline is to be averted, the two sides remain far apart over the permissible future scope of Iranian nuclear activity.

Perhaps the biggest hurdle to overcome, six-power diplomats said, is Iran’s stance regarding its uranium-enrichment centrifuges, which one negotiator described as a “huge problem”.

Centrifuges are machines that spin at supersonic speed to increase the ratio of the fissile isotope in uranium. Low-enriched uranium is used to fuel nuclear power plants, Iran’s stated goal, but can also provide material for bombs if refined much further, which the West fears may be Iran’s latent goal.

“The Iranians have not yet shown a willingness to reduce their centrifuges to an acceptable number, making it difficult to envision a compromise at this point that we could all live with,” the negotiator told Reuters. Another Western official close to the talks confirmed the remarks as accurate.

A senior Iranian official appeared to confirm the assessment.

“Our Supreme Leader (Ayatollah Ali Khamenei) has set a red line for the negotiators and that cannot change and should be respected,” he told Reuters. “Uranium enrichment should be continued and none of the nuclear sites will be closed.

“What the West offers Iran on the number of centrifuges is like a joke and unacceptable,” he continued. “However, negotiation means trying to overcome disputes and it is what both sides are doing.”A senior U.S. official said on Monday that all disagreements must be cleared up for a long-term settlement with Iran to be clinched. “Nothing is agreed until everything is agreed.”

The United States, France, Britain and Germany would like the number of centrifuges Iran maintains to be in the low thousands, while Tehran wants to keep tens of thousands of them in operation. It now has about 19,000 installed, of which about 10,000 are spinning to refine uranium.

The more centrifuges Iran has in operation, the more quickly it would be in position to produce sufficient highly-enriched uranium (HEU) for an atomic bomb, if it were to choose to do so. Western powers want the time frame in which Iran could in theory produce atom bomb fuel to be stretched out as much as possible.

Tehran, however, rejects allegations from Western powers and their allies that it is seeking the capability to produce nuclear weapons, insisting its atomic ambitions are limited to peacefully generating electricity.

Iran has refused to heed U.N. Security Council demands to suspend its enrichment programme, leading to crippling U.S., European Union and U.N. sanctions that have damaged the Iranian economy and sharply reduced oil exports from the OPEC member.

Centrifuges are not the only sticking point in this week’s talks, which are expected to run until Friday, diplomats say. Others include the types of centrifuges Iran uses, the speed of the lifting of sanctions and the expected duration of curbs that would be imposed on Iran’s nuclear activities.

Two other stumbling blocks are Iran’s planned Arak nuclear reactor – which Western officials suspect could be a source of plutonium, an alternative to HEU as bomb fuel – and Iranian clarification of intelligence indications that it researched how to design bombs in the past – something it also denies doing.

Diplomatic sources have told Reuters that it is increasinglyprobable Iran will seek a prolongation of the talks deadline.[ID:nL1N0OL0YZ] But Western officials insisted the focus nowremained on sealing the deal by late July, noting that anyextension must be agreed by all sides and would likely be short. “If there is an extension it will be for a few weeks,” adiplomat from one of the six powers told Reuters. If a deal werereally within reach, the sides should not need six more months, the maximum extension approved under a preliminary deal Iran struck with the six powers in Geneva last November.