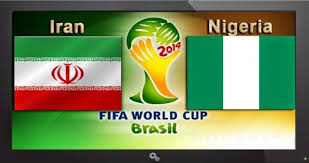 The two most defensive teams at the World Cup astonishingly failed to produce a thriller for the ages as Nigeria and Iran played out a goalless stalemate, the first draw of the tournament.

A game between two of the most defensive teams in the tournament didn’t result in a high-scoring classic and probably the worst game of the tournament so far. Who could’ve suspected it?

Despite an initial flurry of chances, the game soon settled down into a rather tepid affair between two desperately limited sides, with Nigeria enjoying more of the ball but failing to really test their opponents, with a lack of creativity the old bugbear in the Africans’ offence.

Although the eventual product was a dull encounter, the game initially looked like it was going to be a cracker as NIgeria went for Iran in the early stages. They came close to scoring in the opening minutes when Iran goalkeeper Alireza Haghighi spilled a cross into the area which preceded Victor Moses seeing a shot blocked and Ogenyi Onazi firing wide.

Nigeria were dealt a blow when Godfrey Oboabona had to be withdrawn after coming off worse in a clash, being replaced by veteran centre-back Joseph Yobo, but the game was becoming bogged down between two teams that could not find a final ball or any real decisive play in the final third, and chances were at a premium.

Iran did come close through Ashkan Dejagah following a corner, but Vincent Enyeama was equal to his effort and kept it out to keep the game deadlocked.before half-time. Shortly after the break, Stephen Keshi wasted little time in making changes, and Victor Moses was soon withdrawn for Shola Ameobi to make his World Cup debut.

The Newcastle forward soon had one of the best chances of the game, too, as he rose highest in the box to plant a header goalwars after a good cross from Ahmed Musa, but despite being well-positioned his effort spun off-target. Nigeria were doing most of the attacking as the game wore on, but Iran’s impressive defending was keeping them at bay with relative ease, and combined with a lack of patience and quality in attack for both sides, produced a pretty poor spectacle in what has so far been a thrilling World Cup.

Iran did have to hold out against a late Barrage as Ameobi was inches away from getting into another cross before a series of injury-time corners threatened a late Nigeria win, but Iran held out to secure a win that is unlikely to do them much good and end a game which I have already forgotten ever took place.